Anna Lives On. Report from the Defend Afrin Demonstration in London

This is a report from Plan C London 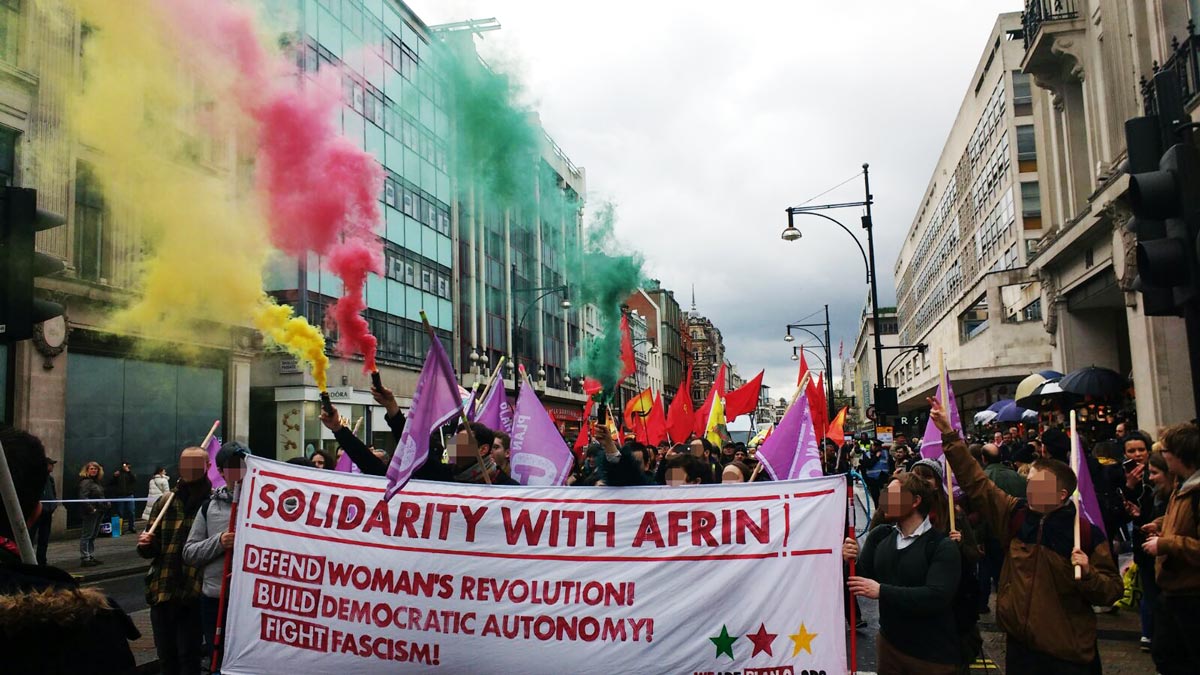 On Saturday March 31st, around 1,000 people converged on Old Quebec Street, Marble Arch, London to demand that the body of Anna Campbell be returned and that a ceasefire is called on Turkey’s invasion of Syria.

Anna was a 26 year old anarchist and anti-fascist comrade, killed alongside two close comrades by an airstrike while providing defensive cover for refugees leaving Afrin canton in Rojava, Northern Syria. She was known to many in the UK anarchist, anti-fascist and ecological movements. An extremely dedicated and inspiring women, who was not afraid to face down oppressive and violent movements – be that in Dover against neo-nazis or the murderous Turkish regime of Erdogan.

As one of our members who was with Anna in Rojava commented “She spoke of her belief in the revolution and her desire to live up to the strength of the women of Rojava. I didn’t doubt it, she seemed destined for great things, a true revolutionary.”

On the streets through Central London

It was evident at the start of the demonstration that a large non-kurdish anarchist and anti-fascist crowd was in attendance, with around 50 coming from Bristol alone (Anna had lived in Bristol for a number of years). It was noted by one Kurdish solidarity organiser that it was the first time on such a demo that Kurds were almost outnumbered by non-kurds. This is a positive development. After years of being sidelined by most of the British left, continuous mobilisation and action by Kurdish groups in the UK is beginning to make a difference. Despite an all-consuming war, the inspirational project of democratic confederalism in Rojava has given the region a model of multi-ethnic, grassroots and democratic self-governance that is increasingly being recognised as needing our solidarity.

Around 30 members and supporters of Plan C attended the demonstration. We marched as a bloc as we wanted to show the visible support of a non-kurdish organisation, as has been the request from the Kurdish movement for years.

Along the route of the march 2 teams were handing out leaflets and talking to people in Oxford and Regent Street, distributing over 500 flyers.

As the demonstration reached Piccadilly Circus, hundreds of us sat down and blocked the main junction. Hundreds more stopped to listen to Paula from the Kurdish Solidarity Campaign, the organisers of the demonstration, give a brilliant speech describing clearly the political significance of the struggle in Rojava, beyond what others may see as another conflict unconnected with their lives here in London.

The demonstration finished at Parliament Square where we heard further speeches from Steve Sweeney of the Kurdish Solidarity Campaign, representatives of Unite and GMB unions, and Elif Sarican from the Kurdish Students Union presenting a call out for a demo for Abdullah Öcalan’s birthday in Green Lanes at 1pm on Wednesday 4th of April.

After this the demonstration dispersed and Plan C members left Parliament Square, when police made a targeted arrest of a leading member of the Kurdish youth assembly and another who came to their aid, an action undertaken, according to a cop (number FH152), because they ‘failed to provide a name and address’. This was a blatant tactic to intimidate Kurdish youth and their allies, and to prevent their militancy on actions and demos. The attempt completely backfired when community members of all ages and their allies, including Plan C members, went to Charing Cross station and blockaded the road outside, preventing all vehicles from moving (apart from an ambulance and volunteers delivering food to a homeless kitchen), turning back an unmarked police car, three squad cars, and two vans including one carrying militarised officers with handguns and submachine guns.

The blockade was maintained for about an hour and a half until the arrested friend was contacted and found to have been taken elsewhere – eventually being released at 2am. Although they had been taken elsewhere the action was necessary and successful, demonstrating that our friends, comrades and allies will not be arrested without a response.

The major news from the last few days is French president Macron’s announcement that troops will be sent to Manbij, the next area of Rojava the Turkish state was threatening to invade, and which it already holds territory nearby. Macron has also undertaken to include the PYD in peace talks for ending the war in Syria. While we welcome this news, particularly the PYD’s potential inclusion in peace talks, we recognise that this is simply another imperial power making a tactical alliance, just as the US did previously – before showing just how fleeting these ‘alliances’ can be. Nevertheless given the current contradictory situation this should help firm Rojava’s resistance in the face of NATO’s second largest army, at least slowing the Turkish state’s advance, so we thank and applaud French comrades for their solidarity mobilisations forcing the hand of the French political class.

The Turkish state has also threatened Shengal (Sinjar) in Iraq, a majority Yezidi region defended by the YPG/YPJ after Daesh’s (ISIS) invasion and attempted genocide. There have already been reports of Daesh graffiti in Afrin and crimes against Yezidi, and the links between Daesh and the Turkish state are well documented. This is therefore a dangerous situation, with a possible repeat of Daesh’s genocidal campaign against Yezidi as part of a broader attempt by the Turkish state to commit genocide on Kurds.

Plan C has been active since 2014 in Kurdish support structures, starting with the first ‘World Kobane’ day. Through our Rojava Cluster we have fundraised with other organisations for a school bus, a bread co-op and three members have travelled to the region to work on civilian projects as part of the process of building and developing the autonomous communes. Recently a European tour presented what we have learnt, some of which has been written about on our website.

We have always been clear that our support for Rojava is not just one of solidarity with oppressed people, but a means through which we can learn and develop similar mass participation, autonomous forms of self-governance as alternatives to capitalist and centralised state regulation of social life. Our solidarity is as much about providing direct material support to struggles in the locations they occur in as it is about spreading and raising consciousness so similar projects can occur here. We need to do more to recognise the importance of mobilising wider layers of supporters beyond the Kurdish diaspora in London, and make the case that the insubordination against imperial interests in the Rojava region and our own processes of insubordination here need to be intertwined in the struggles we are involved in.

We offer our solidarity to Dirk, Anna’s father, who supported her desire to stand up in struggle. We leave you with this note from one of our members on Anna: “She was a feminist, a fighter and a brave comrade. I know she will live on in the spirit of the revolution, the martyrs of Rojava are immortal and we will fight for a feminist, egalitarian future in her name. In the fires of Newroz and in the Kurdish New Year we will celebrate her life and remember all the brave men and women who have given their lives for revolution.”

What You Can Do

1. Get involved in campaigning: contact a local group involved in solidarity work, check kurdishsolidaritynetwork.wordpress.com for a local group, or email info@kurdistansolidaritycampaign.org or info@weareplanc.org if you aren’t in one of those cities.

2. Lobby your MP: these atrocities are only possible because powerful Western states are turning a blind eye. While lots has been said in the news about what is going on elsewhere in Syria, such as eastern Ghouta, the media and our politicians have been silent about Afrin. Cause a racket.

3. Donate: Plan C’s Rojava solidarity cluster are part of an international campaign to raise money for bandages for YPJ units in Afrin and Shengal, for more information see here. You can also donate to Heyva Zor, they raise money for vital medical supplies, http://www.heyvasor.org.uk/