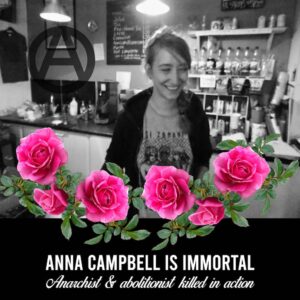 For four years now, people have consistently taken to the streets to demand that the body of Anna Campbell be returned and that a ceasefire is called on Turkey’s invasion of Syria.

Anna was a 26 year old Anarchist and anti-fascist activist from England, killed in Syria alongside two local women comrades of the YPJ by a Turkish airstrike airstrike while providing defensive cover for civilians fleeing Afrin in Rojava, northern Syria.

Anna was known to many in the UK Anarchist, feminist, anti-fascist, international solidarity and ecological movements. An extremely dedicated and inspiring woman, who was not afraid to face down oppressive and violent movements – be that in Dover against neo-nazis, or Erdogan’s murderous regime in Turkey.

Kurdistan Solidarity Network spoke with Anna’s father, Dirk Campbell, about his ongoing campaign to demand that Turkey return Anna’s body home to her family in Britain, and the importance of the current crowdfunding campaign that’s raising funds to take the fight to the European Court of Human Rights in Strasbourg.

KSN: Hi Dirk, thanks for speaking with us. Could you begin by telling us what the crowdfunder is about and why it is happening?

Dirk: After the documentary on Anna’s life and death went out on BBC TV in July 2019 (‘Anna: the woman who went to fight Isis’) I was asked by Henry Robinson what next? I said the only thing I could think of was to take action against the Turkish government for their illegal invasion of Syria, and the war crimes and human rights abuses they had committed and were continuing to commit. Henry introduced me to McCues, a human rights legal team, who said they would be happy to take the case on.

Matthew Jury of McCues said that they could only act for me in respect of Turkey’s breach of my human right in failing to recover and return Anna’s remains and refusing to allow me to do so. Prosecuting the Turkish government for war crimes and atrocities would be beyond their scope and would in any case be a quite different matter.

The initial crowdfunder was launched in September 2109 and raised £25,000. This was the cost of gathering all the information and preparing the documentation so as to present a watertight legal case. Initially, the International Committee of the Red Cross and the UK Foreign Office were approached, but this led to nothing. Then, Turkish counsel had to be found and instructed to take action against the Turkish authority controlling Afrin Canton. This again failed to produce any result. Then, the Turkish Minstry of Defence denied any responsibility for Anna’s death and said I was not entitled to recompense.

By this time, McCues had been working pro bono for over a year. When it was decided that we had now exhausted all preliminary steps and could take the case to the European Court of Human Rights (ECHR) we had to launch another crowdfunder to cover the costs of this, amounting to £19,000.

KSN: Could you give us an update on where the campaign is at now? The crowdfunder seems to have had a good start with a lot of support, could you tell us about any developments since the crowdfunder started? Perhaps you could tell us more about the legal process, explaining to our readers in what form the legal process is being brought forward?

Dirk: McCues have started preparing the case but we do still need the remainder of the target amount to come in. If the legal action succeeds, which it has every chance of doing, it will result in an order to Turkey as a member of the Council of Europe to put a stop to the violation and to ensure that future violations do not occur. It will also require Turkey to recompense me and refund the expenses I have incurred! Which would mean in theory that everyone who has contributed would be refunded! This is in my opinion unlikely to happen as recompensing me would be an admission of guilt, which Erdogan never does. However, the slap on the wrist by the ECHR would mean a serious black mark against Turkey, especially as they are trying to join the EU and would reveal Erdogan for what he is, a war criminal of the calibre of Vladimir Putin, precisely when he is trying to set himself up as a peace negotiator between Putin and Zelensky! So it’s definitely worth doing in my opinion.

Dirk: So many memories of Anna it’s hard to choose one. She was not physically strong as a child having been born prematurely, but did her best to toughen up in adult life by doing a blacksmithing course at Plumpton College; getting advice from her brother Adam on how to build up her muscles when she went out to Rojava, etc. She was always as tough as boots inwardly, though. Even as a tiny baby, if there was any situation she didn’t like, or made her uncomfortable, she would let you know in no uncertain terms. But, she was also very sensitive and impressionable. When she was I think about three, I was reading the Three Billy Goats Gruff illustrated Ladybird version. When I turned the page to the picture of the troll looking out from under the bridge, she wailed with fear and I had to console her, but she was probably traumatised forever. Either that or she made a firm decision never to be intimidated ever again by horrible people.

KSN: Together with the military struggle against fascism, Daesh (Islamic State) and the Turkish military invasion, there is also simultaneously a revolution going on – with an Internationalist vision of women’s liberation, social ecology and radical democracy. You have been to Rojava. Would you like to share any reflections on any of your experiences amongst the communes and democratic structures?

Dirk: The Rojava Revolution is an experiment in implementing a new socio-political model. The YPJ internationalists I have talked to do think of it as a revolution. Anna certainly thought so. It is more a revolution in ways of thinking and organising, based on the writings of Abdullah Öcalan, in turn based on the ideas of post-anarchist thinker Murray Bookchin. In this model, there is no nation state; nationalists are regarded as prisoners of this outdated concept as much as those they [the nationalists] imprison for opposing it.

To this extent, Rojava raises the question of how the people of the world could optimally organise themselves. I think it comes from localised political decision-making determining centralised decision-making, rather than the other way round, the way most politics works. This is the idea of the citizens’ assembly, which XR has adopted as one of its three demands as a method of decision-making binding on centralised government. I have seen this in operation in Rojava at local [level] and it works very well, determining central policy by passing local concerns to the central organisation. The other components which work well are the inclusiveness of all ethnicities equally and the importance of women at the centre. Öcalan states that there can be no freedom without women’s freedom.

My impression of the Kurds from when I was in Rojava is that they are amazingly upbeat and positive, despite the terrible suffering inflicted on them and the constant strong likelihood of lethal attack. Imagine how we would feel here if we were under that kind of pressure. I never once saw a single anxious or sad face during my two visits. I saw plenty of rebuilding though. If a Kurd’s house is blown up he starts rebuilding it the next day, never mind that it may get blown up again next week. That’s the kind of people they are. It’s not that they don’t take precautions – I also saw plenty of defensive work, digging of fortified bunkers for people to go into when the shelling starts. But they do live in the present out of necessity as much as anything. And they regard dignity as their only true possession, something that no-one can take from them.

The Kurdistan Solidarity Network would like to thank Dirk Campbell for doing this interview with us. We wish him all success with the campaign and continue to offer our support in any way we can.

WHAT YOU CAN DO