Eight days after her arrest by the Iraqi military on the 20th of April, the German journalist Marlene F. could speak with a representative of the German embassy in Baghdad for the first time yesterday, the 28th of April.

According to information of the embassy representative, Marlene F. Is being kept in a solitary cell in the headquarter of the Iraqi secret service. Marlene F. Had been on hungerstrike until getting in contact with her diplomatic representation abroad.

The 29 year old journalist and her Slovenian colleague Matej K. were doing research during the last months in Şengal (Sinjar), the settlement area of the Yazidis in northern Iraq. Content and aim of the research is the social development in Şengal after the genocide against the Yazidis in the year 2014, committed by the so called Islamic State.

2014, there were worldwide reports about the murders and the enslavement of Yazidi women, but today information about the living situation of people in Şengal rarely finds its way to the media. Journalists like Marlene F. and Matej K. do research on the ground, to inform the world public about the society’s coping of the trauma of genocide.

They were arrested at a checkpoint of the Iraqi army in Şengal. After their arrest, their trace had gotten lost until yesterday. After visiting Marlene F. in prison, the German Embassy informed her lawyer about the allegation of “terror support”. Today, the Iraqi government interprets the research about the Yazidis’ society as “terror support”.

After the arrest of Marlene F. And Matej K., a circle of friends and supporters, together with Marlene’s family, signed an open letter to the minister of external affairs, Annalena Baerbock, on Monday, the 25th of April.

Until today, there hasn’t been a statement by Mrs. Baerbock.

“As a mother, I wonder, what Mrs. Baerbock, who herself is engaged for the Yazidi, says about the fact that a young woman who advocates for an end of suffering of the Yazidi society, is now sitting in prison in Iraq with the allegation of “terror support” said Marlene’s mother, Lydia F.

There still hasn’t been any contact to the other arrested journalist, the Slovenian Matej K. 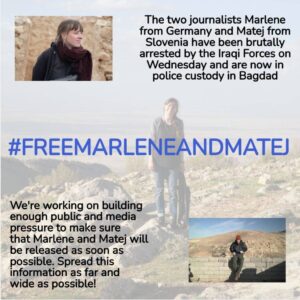 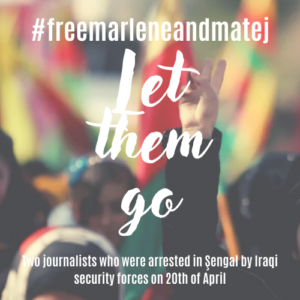