Don’t look away: The fight for Afrin is a struggle for radical democracy

Under fire from the forces of reaction, Afrin is the frontline in the fight for democracy. We cannot afford to ignore or abandon the revolutionaries there, write Amber Huff, Patrick Huff and Salima Tasdemir 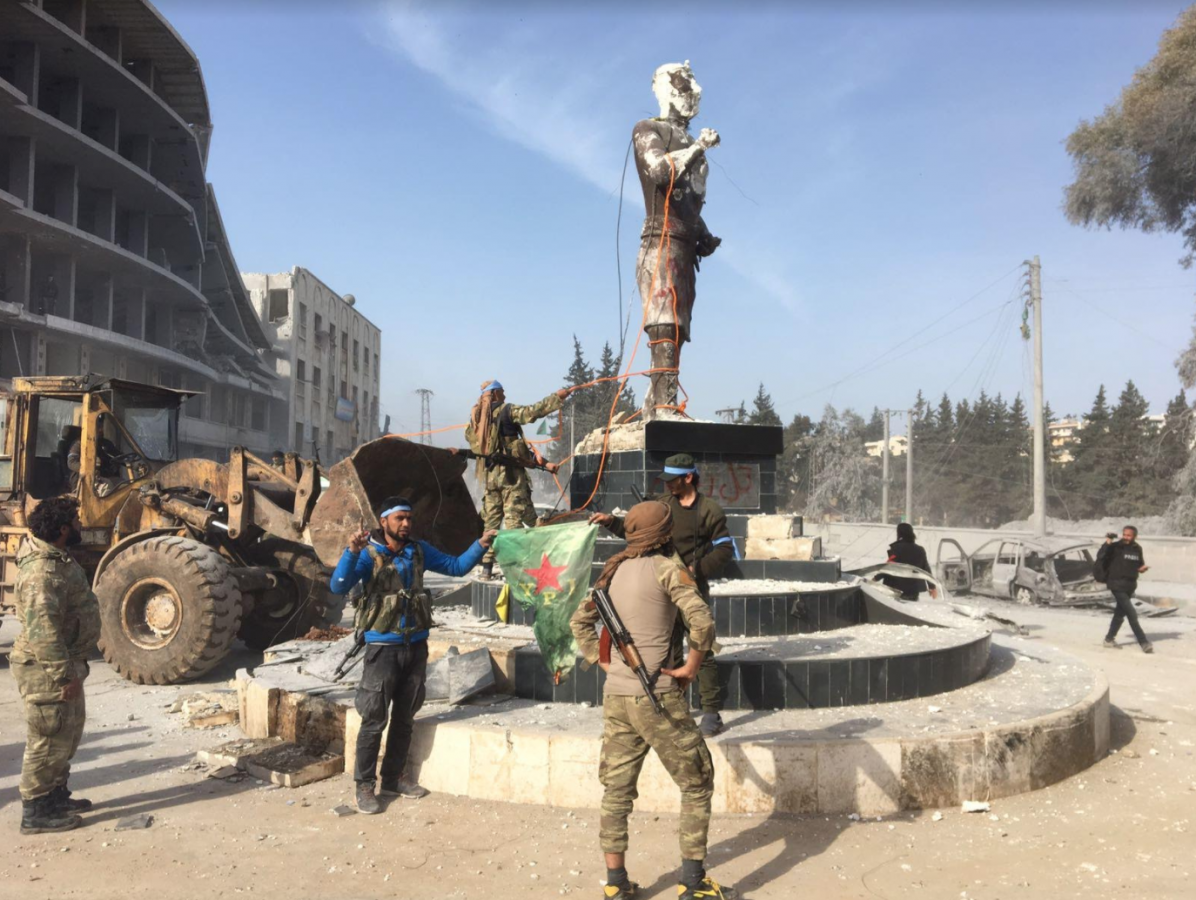 For nearly two months, members of the international Kurdish diaspora, their allies and friends around the world, have called for action and watched with dread, frustration and radical hope as a few thousand lightly-armed members of the Syrian Democratic Forces (SDF), People’s Defense Units (YPG) and Women’s Defense Units (YPJ) have confronted and resisted a gruesomely violent invasion of Afrin Canton in northern Syria by NATO’s second largest military power.

The fight for Afrin

Early Sunday, the news that many had been dreading began to circulate on social media alongside claims by Turkish president Recep Tayyip Erdoğan that the city centre of Afrin had been taken, the ‘terrorists’ were on the run, and that the flags of Turkey and their jihadist auxiliaries in the ‘Free Syrian Army’ (FSA) had been raised in the city. News trickled out from other sources that the SDF, YPG and YPJ had withdrawn to prevent the further massacre of civilians.

Official claims by Turkey describe ‘Operation Olive Branch’ as a tidy operation without civilian casualties, but in recent days and weeks the invasion has in fact involved intensifying direct and strategic targeting of civilians and vulnerable populations by aerial bombardment and shelling, and atrocities committed by Turkish troops and Turkish-backed FSA forces on the ground are estimated to have killed hundreds of people. Afrin’s water supply was cut off and its main hospital was bombed.

An interview with Cemila Heme, deputy director of Heyva Sor (Kurdish Red Crescent) shows the trauma of trying to evacuate the injured and save lives in the midst of a planned campaign of ethnic cleansing. She describes the massacre of Kurdish civilians, the targeting of humanitarian aid workers and displacement of hundreds of thousands of people, many already injured in bombings, who are now completely without shelter, medical care, and the most basic resources. To make matters worse, they have nowhere to go, as the Assad government is not allowing fleeing civilians to freely pass into areas of Syria under his government’s control.

Make no mistake; this war is a war of choice initiated by Erdoğan. Compared to a ‘modern caliph’ with dreams of a restored Ottoman Empire (and performances to match), he seems to enjoy playing the strongman for a domestic audience increasingly enrapt in nationalist fervour while enjoying relative impunity from criticism or sanction from the most powerful members of the international community no matter how egregious his crimes or patently ludicrous his claims.

Despite being a well-documented sponsor of militant Islamist groups and using re-trained jihadist recruits to rebuild the once-defunct FSA, Erdoğan frames the assault on Afrin as a fight against terrorism and a means to secure Turkey’s borders by eliminating the autonomous Kurdish presence in northern Syria. Turkey justifies this by glossing the majority-Kurdish political institutions and defense forces within the Democratic Federation of Northern Syria, widely known as Rojava, as extensions of the Turkey-based Kurdistan Worker’s Party (PKK) who are blacklisted by Turkey, the European Union and the United States.

Talk of rooting out blacklisted groups is quite simply a red herring. Framing its aggression against Kurds and their institutions in both Turkey and Syria in terms of ‘fighting terrorism’ is part of a clear strategy for fanning the flames of Turkish ultra-nationalism whilst legitimizing systemic suppression and disenfranchisement of Kurds and the silencing and intensifying criminalisation of broader political dissent. Since the attempted coup of 2016 alone over 70,000 civil servants, human rights activists and demonstrators, elected politicians, lawyers, journalists and academics have been imprisoned in Turkey for entirely non-violent protests, acts of political speech deemed by Turkey’s security apparatus to be acts of terror or crimes against the state.

News coming out of Afrin is often difficult to obtain and independently confirm, but observers familiar with the Turkish state’s treatment of Kurds in Turkey, long support of jihadist groups in opposition of the Assad regime in Syria and the intensification of a century of violent opposition towards any type of self-expression, self-rule or self-organization by Kurdish people more broadly will have little cause to doubt the basic outline of events.

An outward extension of Turkey’s vile domestic policy against Kurds is the only reasonable explanation for the invasion of Afrin, which was, until January at least, one of the most stable and peaceful regions in Syria since the Syrian state collapsed in 2012. The fact is that despite his brutality, Erdoğan’s hold on power is weak and can only be maintained by through intensifying violence, ethnic cleansing and fostering fear to shore up popular support inside Turkey for his re-election in 2019.

Afrin is not the end

This is why his biggest threat to power comes not from ‘terrorism’ across the border, but from a Kurdish-led experiment in revolutionary democracy, ethnic and religious pluralism and women’s liberation that demands autonomy and defends dignity, life and freedom from the oppressive forces of capital, fascism and patriarchy, and which is expanding across the region and inspiring solidarity and movement-building around the world.

Afrin’s fall is not the end; as the war shifts to a new phase the defenders of Rojava have refused once again to be acquiescent victims. Solidarity demands that we work to end the silence around the atrocities that being committed against them, and recognize that their struggle is our common struggle for life and the freedom to build better worlds in the ashes of broken and violent states.