Dan Burke and Paul Newey are appearing in court by telephone today. While Dan Burke is currently on remand in prison. All of them are being accused of ‘terrorism’ relating to supporting the YPG Peoples’ Defence Forces.

For background information about the repression against Paul and Sam see – https://kurdishsolidaritynetwork.wordpress.com/2020/04/30/some-background-about-the-repression-of-paul-and-sam-newey/

We have collected together messages of solidarity for them:

Message of Solidarity From UK Internationalists in North and East Syria

We are sending all love and solidarity to those up in court today, and to everyone feeling the increasing oppression of the British and other states against internationalism and the Rojava revolution. Our hearts are with you and we wish we could be too. We’re not surprised at the actions of the British state, but that doesn’t make them any less condemnable. The UK government would claim to be on the side of a feminist, ecological democracy. This persecution of our comrades and their families exposes that flimsy fiction.

The UK government is afraid of what the YPG and YPJ stand for, what our friends have bravely fought for, and some even died for. Specifically targeting international support means they reject and fear not only the organization, but the idea of its values and principles spreading into their own territories. These prosecutions are in part attempts to discourage people from connecting with the Rojava revolution.

It’s not going to work, because we are all still here. Some of us are physically in Rojava, others still ready to stand with the movement. And we all offer that same solidarity to those currently being prosecuted. We are with you, and we will do whatever is necessary to support you, from international campaigning to cups of tea. Both because this repression is unnacceptable, and because we feel this as an attack on us all. Make no mistake, they’ll be coming for the rest of us tomorrow. That’s partly why we need to stand together now.

So far criminalisation has mostly affected internationalists involved in military structures in Rojava and their families. Civilian internationalists are being surveilled but so far mostly unpunished. This is not good news. On one hand, this is an attempt to divide us. The state wants some of us to distance ourselves from our comrades, to say “we’re not like them, we’re the good kind of volunteer.”

Not only would we never throw our comrades to the lions like that, but the reality is, we are in the same struggle. Legitimate physical self defence is nothing without social and cultural movements and the revolution of the mindset. That’s what our forces are defending. In just the same way, you cannot develop a movement, change society or make a revolution if you cannot defend yourself. There are frontlines everywhere, and some of us fight on the physical; others the mental, social, or ideological.

And this is an age old tactic. Oppressive forces divide Kurdish women from European women, the working classes of different countries or the poor and marginalised of different races from each other. And they do it because they know it works. A division in our movements at any level is a win for the enemy.

Just as states across the world are rolling out special powers for the Corona crisis that will never be willingly rolled back in. Just like they are trying to divide society into the good and the bad in these difficult times, with uneven enforcing of draconian laws and attempts to smear sections of society as dangerous or disease carriers. Our communities are stronger than that. We know who our enemy is. We will organise for freedom in every way, and we will do it together. When you come for one of us, you come for us all.

Today the spirit of internationalism is needed more than ever. Sam, Paul, and Dan Newey embody that spirit through their solidarity with the Kurdish Freedom Movement, a movement for peace, justice and liberation. Brighton Kurdistan Solidarity wishes to express our wholehearted support for Sam and Paul as they confront the obviously sham and unjust charges brought against them by the British state. We have every confidence that justice will ultimately prevail. Until then we stand with Paul and Sam Newey and all those around the globe who struggle for a better world.

Fighting terrorism is not terrorism. Support to Sam and Paul from Red action/Red initiative group from Serbia and Croatia.

Message of support from Scottish Solidarity with Kurdistan

They are accused under the Terrorism Act for supporting their respective son and  brother, Dan, who is fighting with the YPG. The YPG defends democracy and freedom against fascism. They defended the world against ISIS. The UK Government was happy for British soldiers to fight in coalition with them when it suited British interests, but now it wants to label British YPG volunteers and their families as terrorists. This is a shameful action and a very dangerous precedent. Scottish Solidarity with Kurdistan stands with Paul and Sam Newey, and with former YPG fighter Dan Burke, who is in prison accused of terrorism, and we know that everyone who cares about the future of humanity will be standing with us.
#RiseUp4Rojava

We also received this amazing solidarity picture from an anonymous comrade: 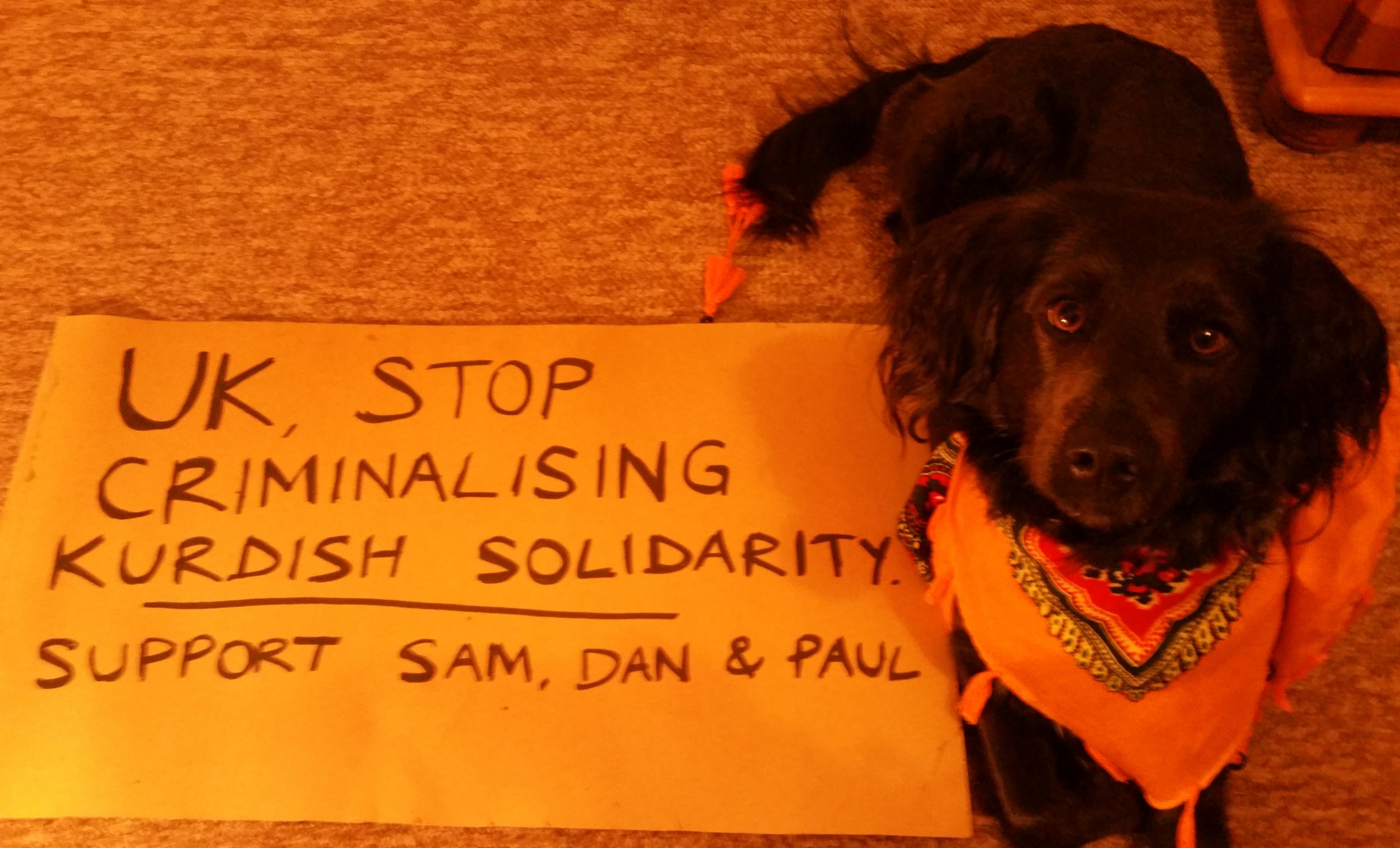