Some background about the repression of Paul & Sam Newey

This article was published in The Canary in January 2020. It contains some useful background information about the prosecution of the Neweys. They are scheduled to attend court on the 1st May 2020, and Kurdistan Solidarity Network has called for action in solidarity with them. 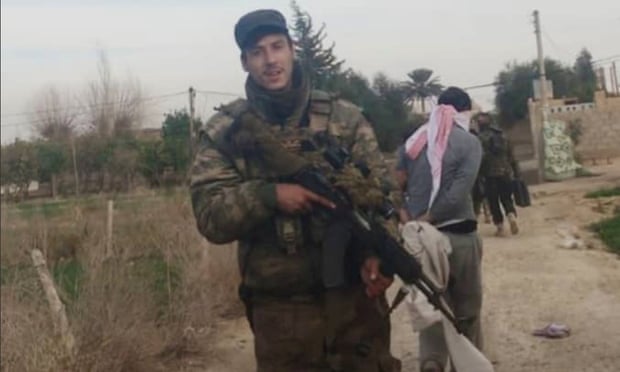 West Midlands Police have charged a father with supporting terrorism for sending £150 to his son Daniel, who is a volunteer with the People’s Protection Units (YPG) in northeast Syria (aka Rojava). The YPG and its local allies have been key in defeating Daesh (Isis/Isil) in Syria, losing over 11,000 fighters during the conflict.

Paul Newey is due to appear at Westminster Magistrates’ Court on Friday 14 February, charged under Section 17 of the Terrorism Act 2000. This will be the first prosecution in the UK of a family member of a YPG fighter. If convicted, Paul faces up to 14 years in prison.

Dan told The Canary that he is calling for supporters to attend the hearing in solidarity with his family, and to bring YPG and YPJ flags.

Dan’s 19-year-old brother Sam has also been arrested this morning “on suspicion of assisting another person to commit terrorism”.

If fighting against the ethnic cleansing and attempted genocide of the people of Northern and Eastern Syria, perpetrated by a NATO member state [Turkey] and its jihadist allies, is deemed to be terrorism, then this shows how immoral and deeply flawed the foreign and domestic policies of the British state are.

In 2012, a revolution began in the majority-Kurdish region of Rojava in northern Syria. People organised themselves into communes, declared autonomy, and began practising stateless direct democracy. The revolution, however, was under threat from the very beginning, and has faced invasion by both Daesh and Turkey.

Hundreds of people from around the world volunteered to defend the revolution. Many of them joined the YPG or the Women’s Protection Units (YPJ), while others have joined the revolution in a non-military capacity.

Stabbed in the back by the US and UK

The Syrian Democratic Forces (SDF), which the YPJ and YPG are an important part of, have been key in the defeat of Daesh. In the battles against Daesh in Raqqa and elsewhere, the SDF provided the ground troops while the US, UK and other Coalition members provided logistical and air support.

Soon after it was announced that Daesh had been defeated, however, the US betrayed the SDF in favour of NATO ally Turkey.

Fréa Lockley wrote for The Canary in October 2019:

On 6 October, following a phone call with Turkey’s president, Donald Trump reportedly ‘dumped‘ the people in northern Syria (aka Rojava) who led the way in defeating Daesh (Isis/Isil). This move followed months of Turkish threats to invade the area and crush its progressive revolution… [The] US statement has essentially thrown anti-Daesh fighters in Rojava under the bus.

A bloody invasion and occupation has followed. Hundreds of thousands of people have been displaced and hundreds killed. Turkey has begun to ethnically cleanse the area it has occupied, moving non-Kurdish refugees from other parts of Syria into the homes of those it has displaced.

UK authorities have long harassed and arrested people who have risked their lives to join the revolution and fight against Daesh terrorism and Turkish state terrorism in northeast Syria. But state repression in the UK has increased since Trump’s betrayal of the SDF last October.

In November 2019, Aidan James – a British man who had joined the YPG – was jailed for ‘terrorism’ for 12 months. The judge found that James had received military training at a “PKK base“. The UK currently considers the Kurdistan Workers’ Party (PKK) to be a ‘banned terrorist organisation‘, despite a recent ruling by the Belgian Court of Cessation to the contrary (which added to other rulings elsewhere).

In December, meanwhile, police arrested Daniel Burke, another alleged YPG volunteer. The police charged him with terrorism offences, and Burke is currently in prison on remand.

This brings us to the arrest of Paul Newey. West Midlands Police arrested him in December 2019. His house in Solihull was searched and phones and laptops were seized. He spent four days in police custody before police released him on bail.

Dan’s mother Vikki and teenage brother Sam were also questioned by police back in December.

Would possessing images of Kurdish freedom fighters count? Or what about, for example, the writings of Abdullah Öcalan, the imprisoned PKK leader whose work on democratic confederalism has inspired many of the ideas enacted in Rojava? These are not terrorist movements or ideas. But it’s easy to see how quickly and easily this law could be abused to cover them.

On top of all this, the government is threatening to make northeast Syria a ‘designated area’ under the Terrorism Act. The plans would criminalise almost all travel to the region.

“History will not look kindly” on the current British government

Dan sent a defiant statement to The Canary about the harasment of his family. He said:

Attacking our families will only strengthen our resolve and will us to fight on and resist. We will retain our humanity and morality whilst the ‘powers that be’ continue to fall deeper and deeper into the chasm of appeasement for dictators and tyrants. History will not look kindly upon those that directly or indirectly assist those that spread this hate and intolerance.

He also explained why he felt compelled to join the YPG because he wanted to oppose “crimes against humanity”:

Ignorance is complicity. No matter how much the state attempts to harass and attack those that speak out and act against these crimes, we will not be silenced and we will not stop. We refuse to be ignorant and complicit in these crimes against humanity.

He further stressed that he does not regret fighting for the YPG:

I’m regretful that my actions have caused my family to be treated in this way. But I am not regretful of my actions. No matter what happens either here in Rojava or at home, freedom cannot be stopped or contained. Freedom and equality will always win. Serkeftin! [Serkeftin means ‘victory!’ in Kurmanci Kurdish]