Demo at ‘Freedom for Öcalan’ vigil in Strasbourg

A demonstration was organised on the fifth anniversary of the ‘Freedom for Öcalan’ vigil taking place in the French city of Strasbourg. 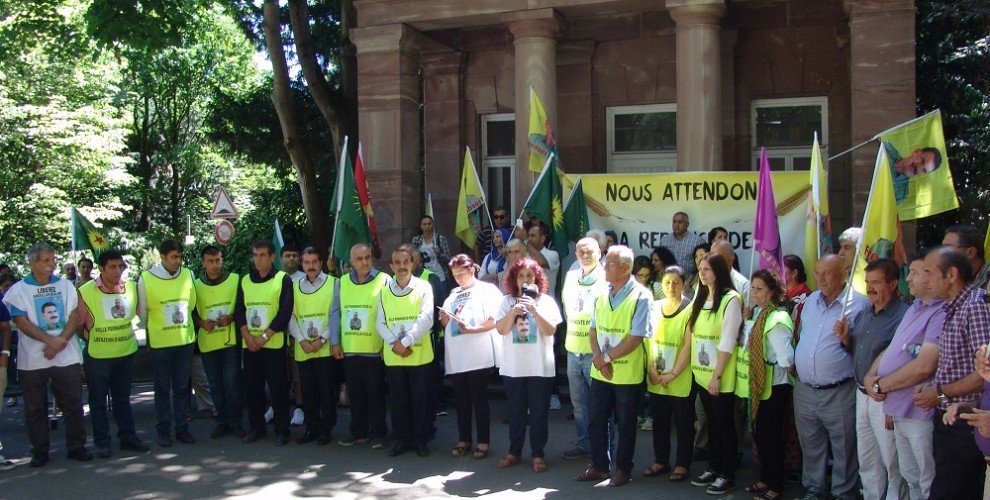 The ‘Freedom for Öcalan’ vigil was started on the 25th of June 2012 in front of the Council of Europe (CoE) in the French city of Strasbourg and continues uninterruptedly since. To mark the fifth anniversary of the vigil, a demonstration has been organized in Strasbourg today.

At the beginning of the demonstration the Co-chairs of the European Kurdish Democratic Societies Congress (KCDK-E) Fatoş Göksungur and Yüksel Koç held speeches and greeted this historical activity which carries on for five years now.

It has been highlighted that within those five years about 1500 Kurds and their friends partook in the vigil that bears importance for the freedom of Kurdish People’s leader Abdullah Öcalan.

Also on behalf of the Democratic Union Party (PYD) a speech was given in which it has been pointed out that the pioneer of the Rojava Revolution is Abdullah Öcalan and that they will continue their struggle until the freedom of Öcalan has been achieved. The speaker called upon the people to enhance the struggle against the occupying states.

Representative of the Free Youth (Ciwanen Azad) stressed that the Kurdish youth will never cease struggling for the freedom of Öcalan and called on all Kurdish young people to unite against the fascist invasion.

Thereafter a statement on behalf of the Kurdish Women’s Movement in Europe (TJK-E) was read aloud in which the five-year vigil activity has been greeted and the aggravated isolation imposed on Öcalan brought into focus, recalling that the only sight received from Öcalan since April 2015 was the one time visit of his brother Mehmet Öcalan.

The statement went on with indicating uncertainty regarding the health state and safety of Öcalan and stressed that isolation per se has no place in any justice system.

The role the European states are playing in this isolation on Öcalan has been emphasized and the Council of Europe (COE) as well as the Committee for the Prevention of Torture (CPT) have been called on to fufill their duty.

The TJK-E brought the importance of Öcalan’s proposals for a solution to the problems of the Middle Eastern peoples to notice and said that every person asking for a solution has to stand for the freedom of Öcalan. The statement greeted the ‘Freedom for Öcalan’ vigil which is the longest lasting and permanent activity of the Kurds ever, and called for “more dynamic” activities to be launched also elsewhere.

Also the statement of the Party of Free Life of Kurdistan (PJAK) emphasised that Öcalan’s freedom was the main objective to them.

The vigil was taken over by the representatives of Kurdish institutions in Europe, who include;