Feminists Rise up for Rojava! Call for global days of action 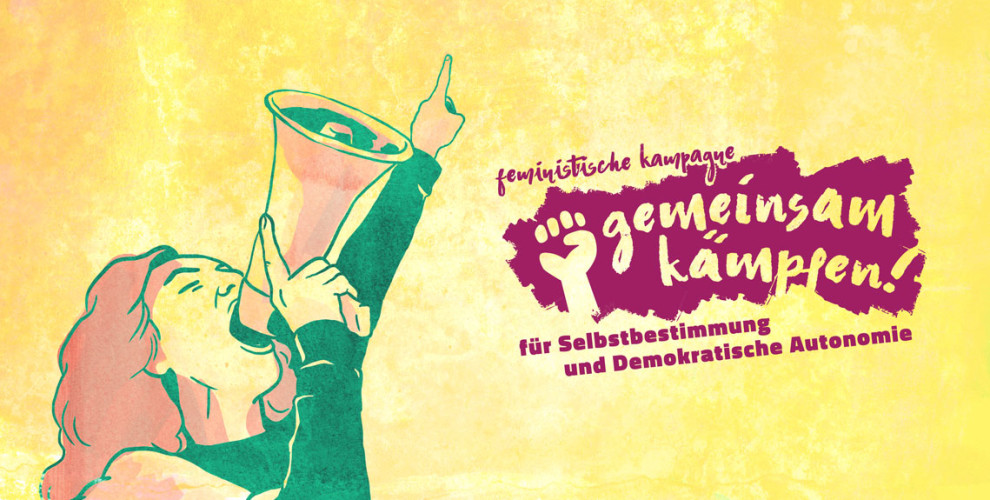 #riseup4rojava – Call for global days of action: Feminists Rise up for Rojava!

The feminist campaign “Gemeinsam Kämpfen – Fight Together” calls for the support of the Global Days of Action on January 27 and 28 to send a clear sign against Erdogan’s threat of a aggressive war on the women’s revolution in Rojava, northeastern Syria.

On January 27 in 2015, after months of bitter fighting and resistance from the YPJ (Women’s Defense Units) and YPG (People’s Defense Units), the city of Kobane in Rojava (northern Syria) was defended against and released of the Daesh (Islamic State).

A threat for the women’s revolution

Already at the beginning of last year – three years after the liberation of Kobani, Erdogan attacked Afrin, the most western canton of the Democratic Federation of Northeast Syria. Since 18 March 2018 Afrin is occupied by jihadist and fascist troops of Turkey and their allies and placed under Turkish receivership. Looting, murders of civilians, rape, kidnapping and ethnic cleansing have become commonplace ever since.

Not even a year later, NATO member Turkey is again threatening to attack the liberated areas of Rojava, northern Syria, where the revolution with women is at the forefront.

We understand the threat of attacks as attacks on the achievements of women in the seven years of the revolution, as attacks on the fought for freedom and autonomy. For us, the women’s revolution in Rojava – which is based on gender liberation, ecology and grassroots democracy – is hope, as it is the living proof that a live beyond the capitalist patriarchy is possible. The war, which the fascist Turkish state and its jihadist allies declared by its side, must therefore be seen as an ideological war against women’s resistance. A fight against fascism, patriarchy, capitalism and all other forms of oppression.

As hard to bear the silence of the international community is – it does not surprise us. Because the beautiful ideas that form the basis of this women’s revolution scares the rulers around the world.

Since they want to preserve the system of the capitalist patriarchy, the rulers put themselves on the side of Turkey, especially the German state which sells tanks to Turkey, maintain a “good diplomacy” with the fascists and its repression against Kurdish activists and those who express their solidarity with the Kurdish movement are becoming worse and worse.

Thus, the economic and political relations of the German and of any other state with Turkey are equally responsible for the situation of the war in and the occupation of Afrin and the coming war in the whole of Northeastern Syria.

Together we fight against the capitalist patriarchy

The war against the women’s revolution is an international war, so we must also respond internationally and develop resistance to fight back this war! Even if we fight with different means in different places, together with our friends in Rojava we fight for the same goal: A life beyond the capitalist patriarchy.

We autonomously organize ourselves to strengthen each other and oppose the patriarchal situation.

We fight for self-determination – be it through the construction of the autonomous women’s village Jinwar or for the abolition of paragraph 219a.

We defend ourselves – be it the military struggle against Daesh and the fascist Turkish state, or the fight against the general appropriation of feminist issues from the law.

We fight against violence against women* by exposing that this violence is always political. We fight against rape culture, where it is considered normal for women to face rape anytime, anywhere, and their job is to protect themselves from it.

Our struggles here may differ from the struggles of the friends there, and yet it is a common struggle. That’s why an attack on the utopia lived in Rojava is also an attack on all of us who dream of another world and are ready to fight for it.

We are convinced that we have a historical responsibility to defend the revolution and freedom against all threats in Rojava as well. That’s why we call on all feminist forces to support this self-governing feminist revolutionary resistance and participate in the Global Days of Action on January 27 and 28!

Be creative, be loud, be colorful! Spread the beautiful ideas that form the basis of this revolution! Participate in actions and organize demonstrations or actions of civil disobedience!

Lets defend the women’s revolution of Rojava together, lets defend our hope!