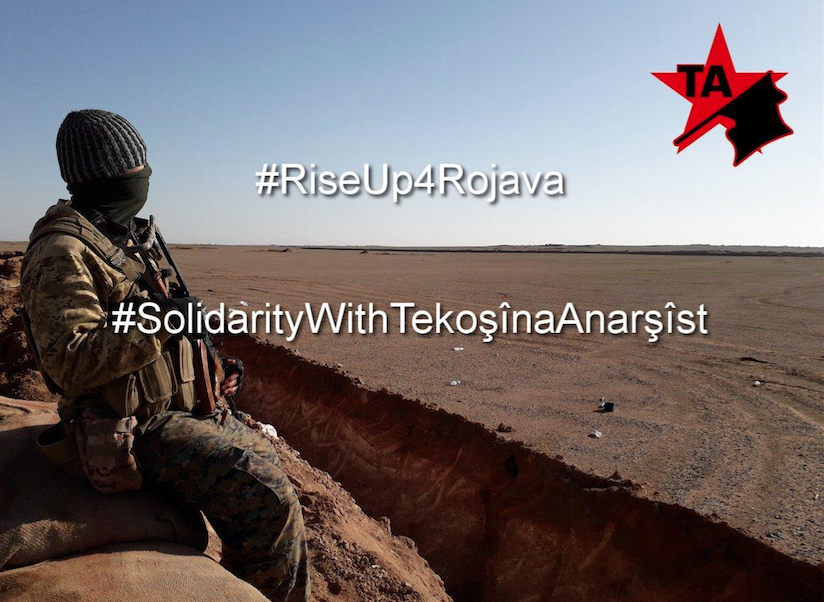 Call from the Revolutionary Abolitionist Movement / 20. Jan 2019
The Rojava Revolution, rooted in the Kurdish freedom movement, has offered a new paradigm for political change and become a fertile ground for international revolutionaries. It is one of the most important political experiments in the annals of revolutionary history. The power games of nation-states led to the widespread dispossession and oppression of Kurds in the Middle East. Through that struggle, we have seen the birth of one of the most vibrant political movements, based on feminism, anti-state theory, ecology, and anti-capitalism.

Out of the devastation of the Syrian Civil War, the Rojava Revolution emerged, and, like all political movements, it was faced with challenging political realities. Surrounded by hostile forces— the fascist Turkish state to the north, ISIS to the south, and Assad to the West— Rojava’s forces entered into a tactical arrangement with the US, recognizing the agreement with the US was temporary and tactical. They were very aware of the risks involved.

Today, Erdogan remains poised to strike at Rojava, unequivocally rejecting National Security Advisor John Bolton’s suggestion that US forces remain in the region until, among other things, Erdogan assures them that he will not do so. Meanwhile, revolutionaries around the world have been strengthening their ties, preparing to defend their comrades in the face of impending Turkish invasion, inevitable betrayal by US forces, and potential military occupation by various state entities.

Now is the time for revolutionaries to stand up, as our comrades are facing potential slaughter by fascist forces. We stand in solidarity with Tekoşîna Anarşîst (Anarchist Struggle), a militant anarchist formation founded in August 2017 that, in response to the increasingly imminent threat from Turkey, recently made public its presence in Rojava. Coalitions of internationalists have been inspirational in their commitment to the revolutionary movement in Rojava, as well as the roles their members have played in liberatory struggles around the world. Tekoşîna Anarşîst has been active in a final push against Daesh, and sets a positive example for anarchists worldwide. We respect and honor the memories of those who have fallen in this struggle.

Join us in the Revolutionary Abolitionist Movement to make it clear that revolutionaries will not falter in our support. We want to light up our cities with direct actions, demonstrations, and messages of support for our comrades. RAM will join other revolutionary groups around the world in acts of solidarity on the weekend of January 26, 2019.

Now is the time for action!