The date and time of the film screening of Sara at SOAS has been changed to accommodate interest and is due to take place on Friday 10 March 2017 at 7-9pm.

The SOAS Kurdish Society and The Kurdistan Students’ Union UK (YXK UK) invites you to the screening of the documentary about the life of Sakine Cansiz (SARA), founding member of the PKK, who was assassinated with two other women in Paris in 2013. She is one of the most symbolic figures of the Kurdish Movement, especially for women. The documentary tells her life story in chronological order: childhood, youth, founding of the PKK in 1978, ten-year prison term until she and two other women in the Kurdish Freedom Movement, Fidan Doğan and Leyla Şaylemez, were murdered in Paris on January 9th in 2013 as a result of a politically driven assassination.
“The legendary, rebellious, unyielding and revolutionary Kurdish woman with red hair. Sakine Cansız, whom we hear much but know less about, has left periods of her life on the pages of history with her three-volume book ‘My Whole Life Was A Struggle’. History is never dust-laden shelves! History is essentially every second we live. She was a revolutionary who believed history to be alive. As a loyalty to her memory, it is the heaviest and most honourable responsibility of ours to convey her life to new generations.
In the documentary SARA – “MY WHOLE LIFE WAS A STRUGGLE”, Sakine is told about, by herself, her parents and siblings, and mostly by her comrades.” 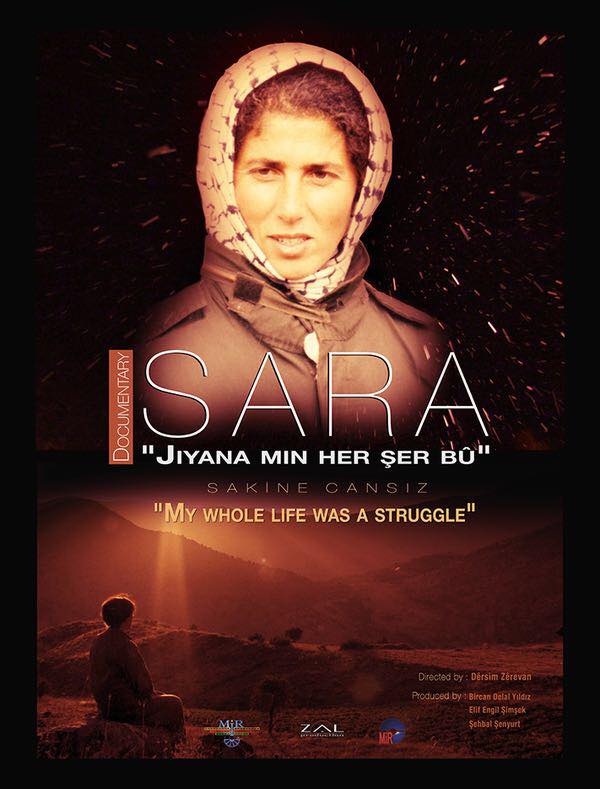