Justice for the Paris Attacks 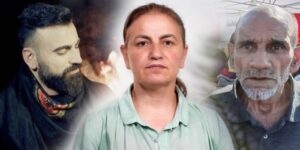 On the 23rd December 2022 a man named William Mallet opened fire on the street outside the Kurdistan Democratic Centre of Paris, which also houses the Kurdish Democratic Council of France. The attack killed three Kurdish comrades; Emine Kara, Şirin Aydin and Abdurrahman Kizil, a fourth person was also seriously injured.

The attack hit international news and was reported on by many major news outlets including the BBC and Al Jazeera. All these news agencies described Mallet as a ‘lone gunman’, whose motivation was anti-migrant racism. A week prior to the attacks he had been released from prison following an attack on a migrant camp with a sabre where several people were injured. Though this may be true, it feels like a simplistic explanation for an attack that is steeped in some of the Kurdish Freedom Movement’s darkest history and the loss of one of its most influential figures.

Sakine Cansiz was one of the founding members of the worker’s party of Kurdistan (PKK). The ideology of the PKK, largely shaped by its leader Abdullah Ocalan, is responsible for the revolution in North and Eastern Syria (better known as Rojava). The three pillars of this revolution are; women’s liberation, grassroots democracy and ecology. As many friends reading this will know, womens liberation and anti-patriarchal struggle can be an uphill battle even in leftwing movements; women, non-binary and trans friends are often told that the time to fight patriarchy will come ‘after the revolution’. This was not the case within the PKK, seeing women as the world’s first enslaved people, the party pushed leaders like Sakine Cansiz to shape their practice of struggle into the women’s revolution that can be seen in Rojava today. For people who wish to know about this struggle in more depth, both volumes of Sakine Cansiz autobiography ‘My Whole Life was a Struggle’ and ‘Prison Memoir of a Kurdish Revolutionary’ are available from Pluto Press or your local radical bookshop. So, how does this connect with the shootings in Paris last year? Sakine Cansiz was assasinated in Paris, in the Kurdistan Information Centre (just blocks from the Kurdistan Democratic Centre of Paris) on the 9th January 2013, along with two other comrades; Fidan Doǧ‎an and Leyla Şaylemez. Though the attack has formally been attributed to ‘lone gunman’, Omar Gürney, it is now clear that Gürney was a member of MIT (Turkish state intelligence services) and the attack was politically motivated-intended to weaken the Kurdistan women’s movement by murdering one of it’s leading figures. The former head of Turkish General staff, even admitted the murders were carried out by MIT in an interview with CNN-Türk in February 2021 when he stated,

‘They (the PKK) have their elements in Europe as well. We have to do something about it there. I mean, it was already done once in Paris.’

Despite this, there has been no formal investigation into the involvement of MIT in the murders of 2013. The French authorities have instead blocked a transparant investigation from happening, sighting ‘defence secrecy’ as the reason.

In light of this, it is clear why the Kurdistan Freedom Movement is suspicious of an attack that is almost a mirror image of assasinations in 2013 almost exactly 10 years later. Very similar reasons are being given about the attackers motivations and the ‘lone gunman’ story has once again been used to justify an attack that likely has a deeper political motivation. The Kurdistan Freedom movement has published a dossier since the Paris attacks with a list of questions it would like answered through a thorough police investigation. Amongst these questions are:

– After the second target and attack, which was against Avesta cafe/restaurant across the street, the perpetrator turned his attention to a hairdressing salon. Between the Avesta cafe/restaurant and the hairdresser there are many businesses belonging to different groups of immigrants and foreign communities. If the perpetrators motive was based on racism, why did he bother to go so far, to this specific hairdresser’s salon, also owned by Kurds, located 100 metres away?

– If the perpetrator acted for purely racist reasons, why did he only attack Kurds? Why did he only target people belonging to the Kurdish community, which represents a very small part of the French population?

– At the time he went to the Ahmet Kaya Kurdish Cultural Centre in Paris, a gathering of about 60 Kurdish women was supposed to take place. Was the perpetrator aware of this meeting? If so, where did he get the information? Was the ammunition intended to be used to target members of this meeting specifically?

The last of these questions is perhaps the most terrifying of all of these. If the meeting that was supposed to take place had not been postponed by an hour we could be looking at a massacre with many more comrades names amongst those who were killed.

At present there is not yet concrete evidence for the claims of the Kurdistan Freedom Movement, but in the light of increased violence towards the movement by the Turkish state in the last few months (including a failed attempt to launch another invasion of Rojava) and the history that surrounds these attacks, is it not likely that the Turkish fascism may be looking for other ways to damage our movement? Even if the suspicions of the movement are wrong, is this not another example of the growth of the far right across Europe, into both our institutions of power and on the streets. Whatever the motivation, these attacks must not remain unanswered. Internationalists must stand with the Kurdistan Freedom Movement in demanding a thorough investigation by French authorities into both the attacks of 2013 and 2022. Lift the ‘defence secrecy’ now and bring about justice for our comrades!

The Kurdish Assembly of the UK will be holding a demonstration about these attacks outside the French Embassy in London on 9th January 2023 at 12pm, we hope to see you there! You can find more details on Kurdistan Solidarity Network’s social media and website @kurdistansolnet and kurdistansolidarity.net.