Dear sisters all over the world, dear comrades and friends, the defeating of Daeshs caliphate will not need a long time anymore. As female fighters of YPJ&YPJ International we dedicate this success to all women of the world for the 8th march. #YPJIntDez #WomensDay #WomensDay2019 pic.twitter.com/NIIevHqHck 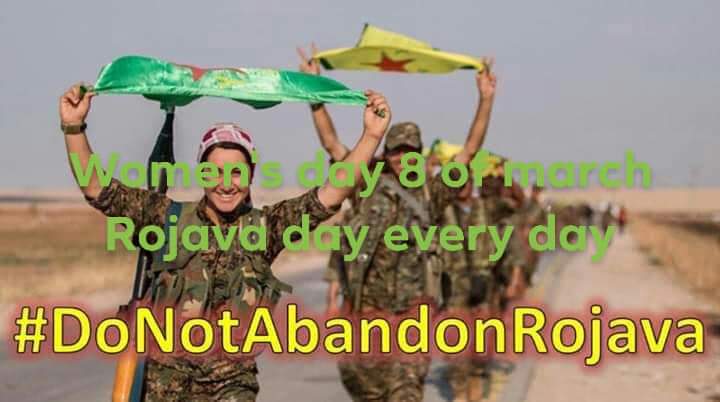 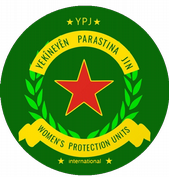 Dear sisters all over the world, dear comrades and friends,

Since more than 100 years the 8th of march is the day of our common expression of fight
for women’s rights and women’s liberation around the globe. It is the common expression following the everyday fight against patriarchy since 5,000 years. For this we send our warmest regards to you, wherever you may resist on this symbolic day.

We are aware of our historical heritage as well as of the current historical situation.
Fighting as internationalist women and non-binaries in the ranks of the women’s self-
defence unit YPJ in Rojava and North-East Syria, we don‘t follow the capitalist-patriarchal idea of dividing the people, disconnecting people from each other and making them lonely. It‘s our deepest belief that we will liberate our gender, all humankind and the entire world just by fighting shoulder to shoulder.

In this historical moment the fight between the democratic modernity, with women’s liberation as leadership, and the capitalist modernity, with patriarchal oppression as the root, came to the peak. We see it in the Rojava Revolution, the successful fight of YPJ against ISIS. We see it in the revolutionary struggle of our Zapatista sisters, who recently expressed their unflinching situation faced with the new bad government. We see it in the unbreakable resistance of our brave comrade Leyla Güven, who turned herself into a weapon against that system that isolated the Kurdish philosopher Mr. Abdullah Öcalan. We see it in the leading role of young women and girls in the worldwide youth-uprising calling for systems change not climate change, to save our Earth and humankind’s existence. We see it in the eyes of the Ezidi women and children, who are liberated after being kidnapped by ISIS five years ago in the feminicide in Şengal. We see it just everywhere, where we open our eyes for it.

The enemy is increasing his attacks, refining his ways. But we reached a big awakening of the oppressed ones, firstly the women and non-males. And history is on our side.
Humans were living in a natural and harmonic way for millions of years, but just a few
thousand under patriarchal terror. Men’s mentality brought this dark period into the
universe; feminist mentality will defeat it and recreate life! The 21st century will be the
century of women’s liberation.

We call all women and non-binaries to stand up, to resist and to organize a global unit of
our genders! The enemy is the same, our methods against him are colourful, because this
is what we‘re fighting for: bringing back all people’s colour!

We send our respectful solidarity to all our sisters and to all the fighting souls.