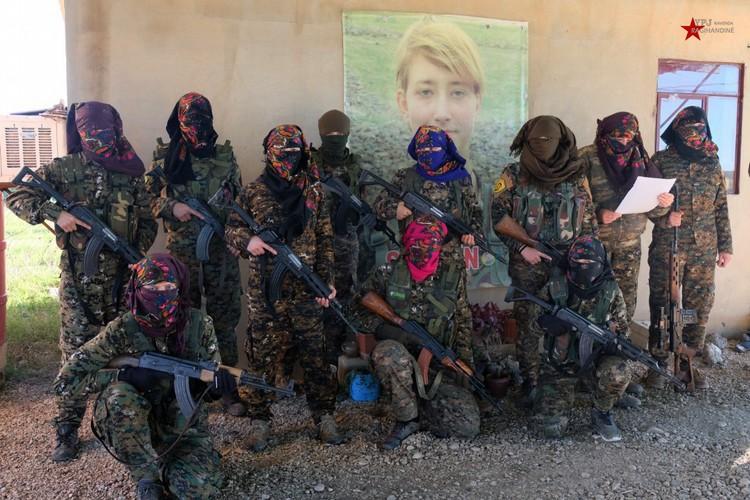 Erdogan and the AKP- MHP fascists have shown with the recent bombings of
already displaced people in the camp in Maxmur and Yazidis in Şengal their
will to invade also Rojava/Northern Syria and introduce fascism all over
Kurdistan and beyond. Since a long time the Turkish state has kept a strong
connection with Daesh/IS. For us it is clear that they are different faces of the
same enemy.

This fascist unit of turkish state, its mercenaries and Daesh is being
confronted by the comrades and the society here in Northern Syria and all
Kurdistan. After the ongoing and brutal invasion of Afrin the NATO member
Turkish state threatens to attack again the liberated area of Northern Syria,
where the revolution is advancing with women at its forefront.

At the time that our comrades are fighting Daesh in Deir ez Zor, advancing in
liberating Hajin, others still continuing to attack the invaders in Afrin, we are
answering with a shout for freedom to the threats against this revolution. It
has become our revolution, because we as internationalist have learned, seen
and lived, that the people in Northern Syria are creating the grounds for a
free and communal society based on gender equality, ecology and basic
democracy.

Opposing fascism, feudalism, patriarchy and all the other forms of oppression
unites us as women from different places, cultures and traditions. We came
here to be confronted with what it means to build up a revolutionary process,to take part in constructing and developing everything what is needed for it
and defend it by all means necessary.

It is not only a physical defense but it is also an ideological defense. This is a
womens revolution! The front against oppression is everywhere.

The economical and political relations that any organization or state is
keeping with turkey are in the same way responsible for this situation of a
coming war. Only one example is the German state that is selling tanks to
Turkey and keeping up a “good diplomacy” with the fascists. All of this helps
Turkey in continuing its tradition of colonizing and massacring people.

As internationalist we are taking up the weapons against the Turkish state
also because of the collaboration of other states in this war. For this reason we
oppose fascism even stronger to defend the revolution in Rojava. We share
one struggle with the Kurdish, Arabic, Assyrian-syriac, Turkmen and a huge
diversity of people against patriarchy, the state system and capitalism. The
seeds for a free life are already spreading everywhere in the world.

We will evolve a resistance everywhere. We need all people, comrades, to feel
responsible, not just to wait for the war, but to stop it now! It is the time to
stand up against fascism! Our places are many, as well are our methods in this
battle. Silence means complicity, let’s point our enemies as a target, make the
situation visible, get organised, start to share and spread the beautiful ideas
that are the base of this revolution.

As internationalist fighters we believe that we become free women when we
face the enemies attacks shoulder to shoulder. Remembering all the comrades
that have fought for freedom until the end – among them thousands of women-
our answer to these threats is unlimited resistance! Their courage and love for
life is an example for us while following their footsteps.