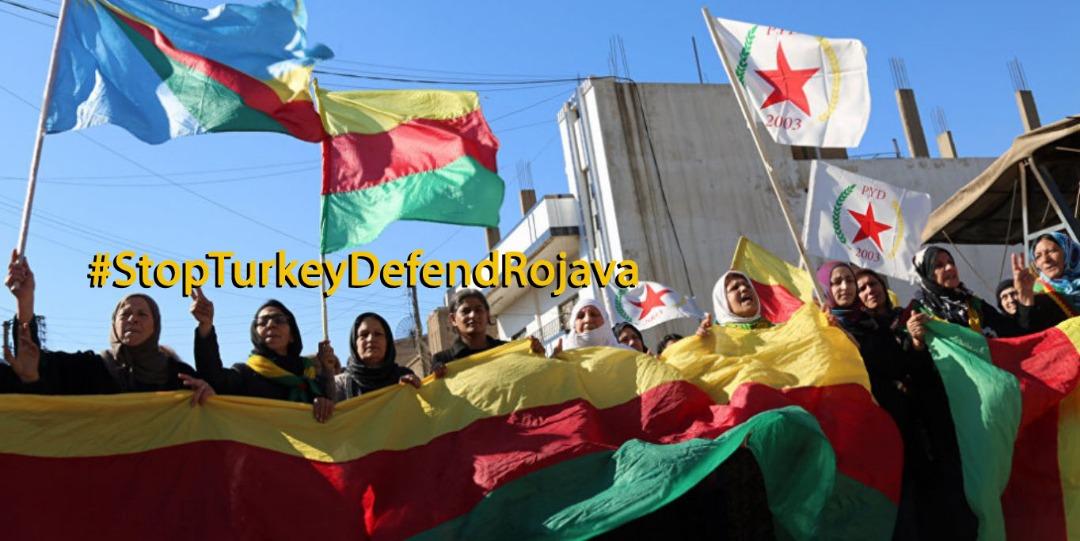 The Turkish state’s threats and preparations for a full-scale military attack against and occupation of Rojava (Northern Syria) are intensifying. In January of this year, the Turkish state initiated a campaign of military aggression against the once peaceful region of Afrin in Rojava, and this campaign, conducted in coordination with various jihadist groups, eventually culminated in the occupation of Afrin. The Turkish state’s war on Afrin resulted in a human tragedy of vast proportions – hundreds of defenceless civilians were massacred and thousands more wounded, and the region was burned, looted, and destroyed by the Turkish state and their jihadist allies. Hundreds of thousands were forcibly displaced from their homes, and the war and subsequent occupation and ongoing campaigns of terror by the Turkish state and its jihadist allies in the region have significantly altered the demography of Afrin. The catastrophe that befell the people of Afrin was the ultimate goal of the Turkish state’s campaign.

The Turkish state now seeks to achieve the same result seen in Afrin in other regions of Rojava, and is currently preparing to attack a 500 km-long region in Syria between the Tigris and Euphrates rivers. The first targets in the region are the border areas of Kobane, Manbij, Tel Abyad, Serêkaniyê (Ras al-Ain), Darbasiyah, Amude, Qamishlo, Tirbespî (al-Qahtaniyah), Dêrik (al-Malikiyah) and thousands of towns and villages. Alongside cities like Qamishlo, Hasakah and Raqqa with large urban populations, there are approximately one hundred towns and thousands of villages in the area, which is currently home to approximately 3 million people. Any Turkish state assault would lead to an unbearable humanitarian tragedy of great dimensions.

It is well-known that, with all their sacrifices, the regional administration of North and East Syria/Rojava and the YPG/YPJ/SDF forces are those who have paid the highest price in the war against ISIS. The entire world witnessed the resistance of Kobane, which was not long ago. These are the same forces targeted by the Turkish state, and Kobane, the bastion of resistance against ISIS, is among the main Turkish targets. The war against ISIS is still ongoing, and the forces of North and East Syria are at the front lines of this war.

The forces of the US-led anti-ISIS coalition, which includes the United Kingdom, France, and other countries, are stationed in this area and maintain an active presence, conducting over 200 strikes in Syria in the last week alone. The coalition forces had promised protection to the regional administration and the peoples of these areas. However, according to recent news reports, due to the Turkish state’s threats, the US is preparing to rapidly withdraw its forces from the region. If the US and the other coalition forces withdraw, they will be abandoning the communities of this area in the face of large-scale massacres. Such a development would lead to a major humanitarian tragedy and would likewise inflict a deep wound on humanity’s conscience.

Our call to the international powers and to humanity:
1.The coalition forces must not leave North and East Syria/Rojava.
2.The UN Security Council must urgently gather, decide to protect this area from aggression, and declare it as a No-Fly Zone.
3.The US must reconsider and cancel the reported decision to withdraw from this area.
4.European nations, especially France, Germany and the United Kingdom, must immediately put this issue on their agenda, and must not remain silent in the face of potential massacres against Kurds, Arabs, Syriacs, Assyrians and Armenians in the region.
5.Russia must not remain a spectator to the Turkish state’s attacks as it did in Afrin, but rather must oppose the Turkish state’s destructive policies and interference in this region.
6.Human rights defenders, peace movements and organizations active in the realms of politics and society, should not remain silent in the face of impending massacres, but rather must hear the voices of the Kurds, Arabs, Syriacs, Assyrians and Armenians, the millions of innocent Alevi, Muslim, Yazidi and Christian civilians threatened by the Turkish state’s aggression, and stand in solidarity with the peoples of North and East Syria and help convey their pleas for protection and peace to the world.

The people of Kurdistan will resist against these attacks. We call on everyone to stand in solidarity with our people!