The Fall of Afrin and the Wider Context in Syria

The fall of Afrin in Rojava in the Democratic Federation of Northern Syria has been announced at the hands of Turkish forces and “Free” Syrian Army militias (some documented as allied to ISIS and Al Qaeda). 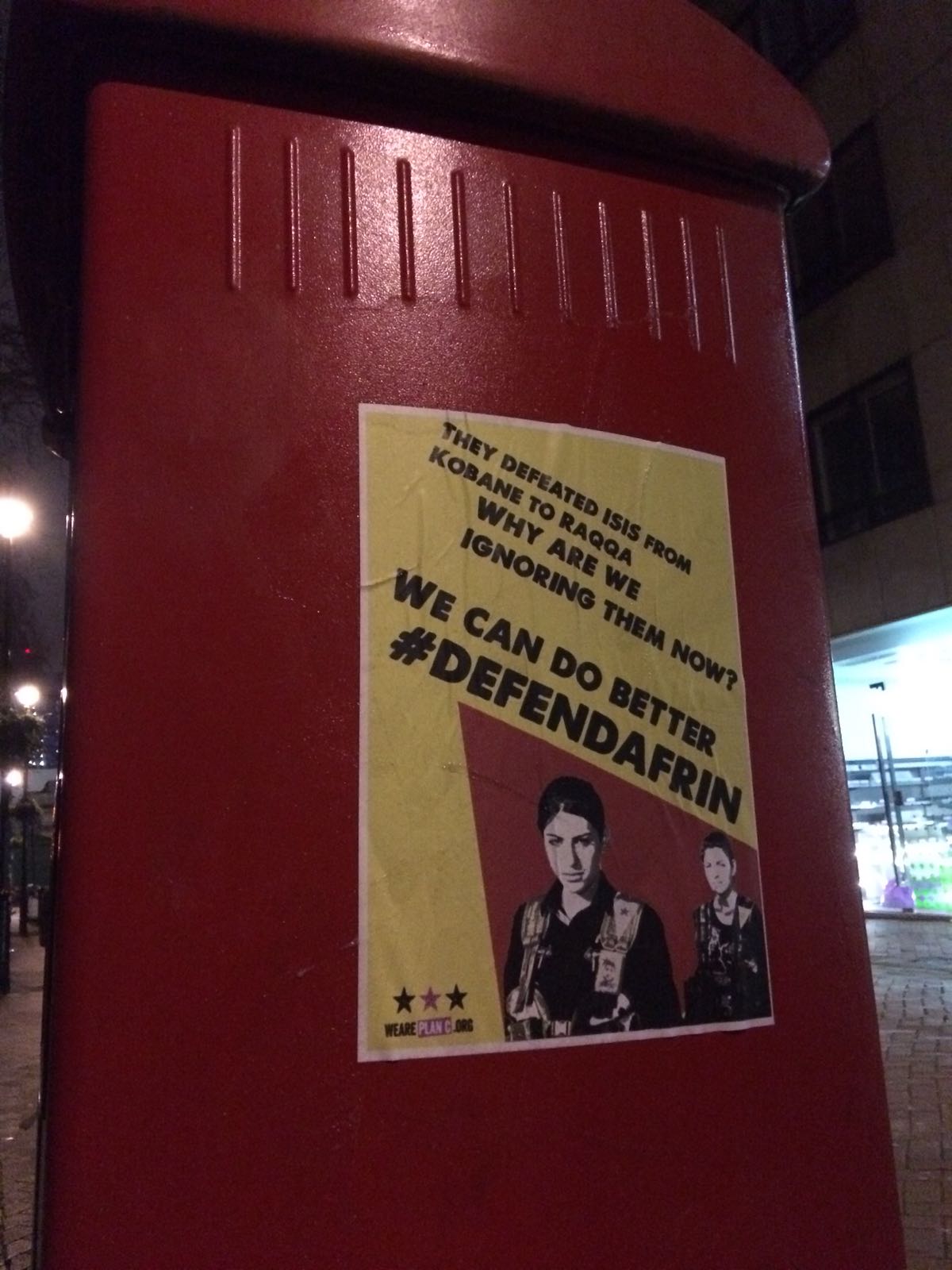 Although the Kurdish and Democratic forces of the YPG/YPJ have announced their intention to continue the struggle against the invaders through guerrilla warfare – and let this be the Turkish state’s Vietnam and Afghanistan – it does represent a real setback for all those fighting for the principles encompassed by the DFNS, those of democratic autonomy, women’s liberation, secularism, and pluralism.

In the maelstrom of factions and international powers involved in the Syrian conflict, and changing fluid alliances, how can this be put in context?

The fall of Afrin is a tragedy born of cynical international interests for whom the interests of the actual people of Syria are irrelevant, except in that they temporarily coincide with the power play of the day. The reporting of events by international media houses follows a similar pattern of distorted or partial news according to their own agendas.

None of the international players, whether it be NATO, Russia, Saudi Arabia, Iran, Assad, Israel or any others, have any direct interest in Rojava and the autonomous democratic initiatives there. Where there has been “support” from both the US and Russia, it has shown to be temporary and reliant on their own self-interest of the moment.

The roll call of conflicting economic interests in Syria’s energy reserves are illuminating and reflect the players in the conflict. What is at stake?

• Syria also has oil shale resources with estimated reserves that range as high as 50 billion tons, according to a Syrian government source in 2010.

• Raw natural gas had an estimated total national daily output of some 14.8 million cubic meters in 2014 according to Syria’s Ministry of Petroleum and Mineral Resources.

• Syria has been described as having significant “hydrocarbon potential” in offshore resources and has been called “a truly frontier area of exploration” with a potential which, if real, “will represent billion-barrel/multi-TCF [trillion cubic feet] drilling targets”

“Once the Syria conflict is resolved, prospects for Syrian offshore production — provided commercial resources are found — are high… once the political situation allows for any new exploration efforts in its offshore territories.” ,” wrote Mohammed El-Katiri, an advisor to the United Arab Emirates Ministry of Defence and formerly a research director at the UK Ministry of Defence’s (MoD) Advanced Research and Assessment Group.

Just in the energy sector alone there are a number of other projects or plans involving the key players in the conflict:

• The Qatar pipeline running through Saudi Arabia, Syria and Turkey where gas could then be transported to Europe. Companies with a stake include US based ExxonMobil and France’s Total.

• The “Islamic Gas Pipeline” (Iran, Iraq and Syria) proposed to transport gas resources from Iran South Pars field through Iraq, Syria, and Lebanon and to Europe under the Mediterranean Sea.

• Israel’s prospection for oil and gas in Golan, highlighted by Netanyahu’s statement to Obama that “Syria was no longer a functioning state, allowing ‘for different thinking.’”

What room for Democratic Autonomy?

In this cesspit of greed and interest what place is there for experiments in democratic autonomy?

In the medium and long term these initiatives of democratic autonomy in Rojava run contrary to the interests of all the main players in a war which fundamentally rests on issues of access to resources in Syria. Experiments in empowering populations to control and make decisions over their own resources represent a risk to all sides in case they can be actually shown to work and provide an example from which the ideas can spread. This is completely contrary to the non-threat represented by ideological groups (including the Islamist ones) which are high on rhetoric but represent window dressing on a continuing status quo of access to resources by powerful patrons.

The profit from conflict

It is in the context of economic interests that ethnonationalism, tribalism, sectarianism, factionalism, and extremism are fermented, encouraged and financed by all sides. Conflict and its aftermath have never been shown to be a barrier to profit, quite the opposite, with vast wealth to be gathered from the extraction or looting of resources. Deals can always be done with whoever controls the resources at a given moment, the more unaccountable they are, the bigger the kickback and the cheaper the commodity.

Even a cursory look at recent conflicts in Africa demonstrates this: Hardwoods used to make lock gates along tranquil British canal systems exported from Sierra Leone and Liberia at the height of the civil wars. People die in atrocious ways whilst Cobalt, tungsten, cassiterite, and coltan (which provide the tantalum for mobile phones) are extracted from Congo despite civil wars which have killed as many people as died in WW2. Nigeria continues to produce oil whilst several conflicts continue.

There are also long term benefits for companies looking to benefit from the aftermath of war. The need for massive rebuilding of infrastructure represents rich pickings, as do the loans which finance them, underwritten by favourable extraction contracts.

Threat to the status quo

The revolution in Rojava represents a fundamental threat to this whole system of organised looting. Putting the oil industry under the control of the Canton councils and being managed by a workers’ committee represents a direct threat to all the players.

As Dr Dara Kurdaxi an economist and member of the committee for economic revival and development in the now fallen city of Afrîn has said:

“We need new models for organisations and institutions. Those which are called collective, communal economic models, sometimes referred to as social economies. This is the method we are using as a foundation, so that the economy in Rojava can pick up and develop. The method in Rojava is not so much against private property, but rather has the goal of putting private property in the service of all the peoples who live in Rojava, for them to use. Naturally we’re only at the beginning. But nonetheless, even if only in small ways, we’re seeing some positive developments. We must be clear that we don’t need an economic revival and development which has no clear goal for the community […] It shouldn’t be a capitalist system, one without respect for the environment; nor should it be a system which continues class contradictions and in the end only serves capital. It should be a participatory model, based on natural resources and a strong infrastructure.”

The democracy of a society must always be measured against the democratisation of its economy… We have acquired a model which in the end will be grasped by the whole world, it has to be. We will sooner or later be successful in this, because it means the success of the community.”

This vision of a new world is what has ultimately lead all the key players to stand back and watch as the people of Afrin are sacrificed to their greed.