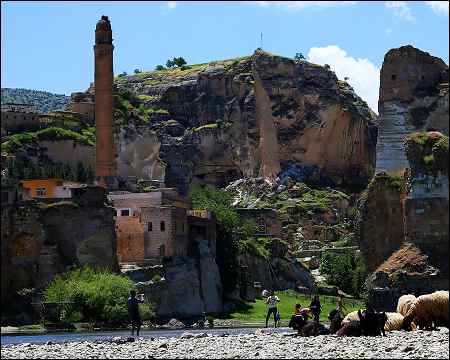 BATMAN, Turkey’s Kurdish region,— The Council of Batman City in Turkish Kurdistan held an important symposium this past weekend. The symposium was on Batman’s Hasankeyf district that sheds light on humanity’s past with its history. Former Minister of Culture and Tourism Ertuğrul Günay, academics, lawyers, parliamentarians, NGO representatives and other notables from the town participated in the symposium.

The two sections of the symposium were titled “Hasankeyf and the Dicle Valley” and “Hasankeyf and UNESCO.” The main goal of the event was to save the Kurdish town from the government’s ideologically motivated destruction through the construction of Ilısu Dam. With its history and geography, Hasankeyf is a significant town in the region.

Hasankeyf is one of the unique towns where history is preserved, and has been home to civilizations such as Hurrians, Mitannis, Assyrians, Urartians, Medes, Persians, Romans, Byzantines, Umayyads, Abbasids, Seljuks, Artuqids and Ayyubids. With its history and nature, Hasankeyf fulfills 9 of the 10 UNESCO criteria but is being destroyed due to the anti-Kurdish policies governments in Turkey have been implementing in Kurdistan. The state purposefully does not apply to UNESCO for Hasankeyf’s addition to the World Heritage List, and is now destroying the town by flooding it. Hasankeyf, the town where stones smell like history, is now being sacrificed for Ilısu Dam as a result of Turkey’s anti-Kurdish policies.

Hasankeyf is home to incredible evidence on the roots of human species, the beginning of agriculture, and the beginning of civilization. The nearly 6 thousand caves around the antique town are one of the first sites of human settlement. Civilized life in the antique town of Hasankeyf dates back to 8th century B.C. and the drawings inside the caves scattered around the town shed light on different periods, cultures and architectures of humanity. The castle in Hasankeyf is located on a gigantic tock, and includes historical artifacts such as the Ayyubids’ Ulu Mosque, Big Palace, Small Palace, Al-Rızk Mosque, Sultan Suleiman Mosque and Koç Mosque, the Assyrians’ Stone Bridge and the Akkoyunlus’ Zeynel Bey Tomb. The construction of Ilısu Dam will destroy these artifacts as well as animal and plant species unique to Tigris and Euphrates rivers.

Ilisu dam will flood the roots of human species

Environmentalists and archaeologists emphasize that the construction of Ilısu Dam will not only flood Hasankeyf. Only 7 thousand hectares of the 37.750 hectares that will be affected by the dam were examined by archaeologists between 1988 and 1991. There are more than 300 archaeological sites within these 7 thousand hectares. 83 of these sites are directly affected by the dam, and the others are susceptible to the dam’s erosion affect. Ilısu dam will flood incredible evidence on the roots of human species, the beginning of agriculture and several civilizations.

The wondrous town of kurdistan will be destroyed

The project for Ilısu Dam was designed between 1950 and 1954, but was reconsidered in 1997. State documents showed that the main motivation behind the construction of Ilısu Dam was ‘security concerns.’ The dam will not only flood Hasankeyf but thousands of acres between here and Amed. Ilısu Dam will not only destroy Hasankeyf but also hundreds of tumulus across the Tigris valley that have not yet been investigated by archaeologists. Hasankeyf is located at the heart of northern Mesopotamia, also known as the Fertile Crescent, as well as all major historical transportation routes. The history of Hasankeyf predates Islam and goes all the way back to 10 thousand B.C; the beginning of the Neolithic era.

Unfortunately, Hasankeyf is to be destroyed due to the Turkish state’s anti-Kurdish policies. Batman City Council wants to create more awareness on this issue and prevent the destruction of Kurdistan wondrous town Hasankeyf.