Today marks seven years since the women and men of Kurdistan launched a historic resistance against the brutal fascism of Islamic State which condemned the people of Rojava and the Middle East to death, slavery and violence, the fighters of the YPG (People’s Defence Units) and YPJ (Women’s Defence Units) chose instead to stand for freedom, for justice and for life. They held on through months of hard, bitter struggle, with thousands of their friends, family members and loved ones falling in the fight. As the nights grow longer and colder, let us remember those who seven years ago refused to give up as autumn turned to winter, who continued to remember what they were fighting for and believed that it was worth it. 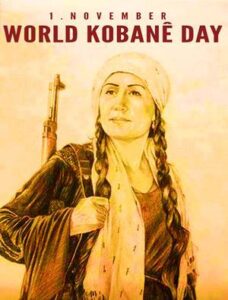 As the UK Women Defend Rojava committee, we are proud to stand shoulder to shoulder with the women of the Kurdistan Freedom Movement. We seek to learn from the Kurdish Women’s Movement, and also to take action here in the UK to defend it from the threats it faces.