The Party of Kurdistan’s “Third Revolution” 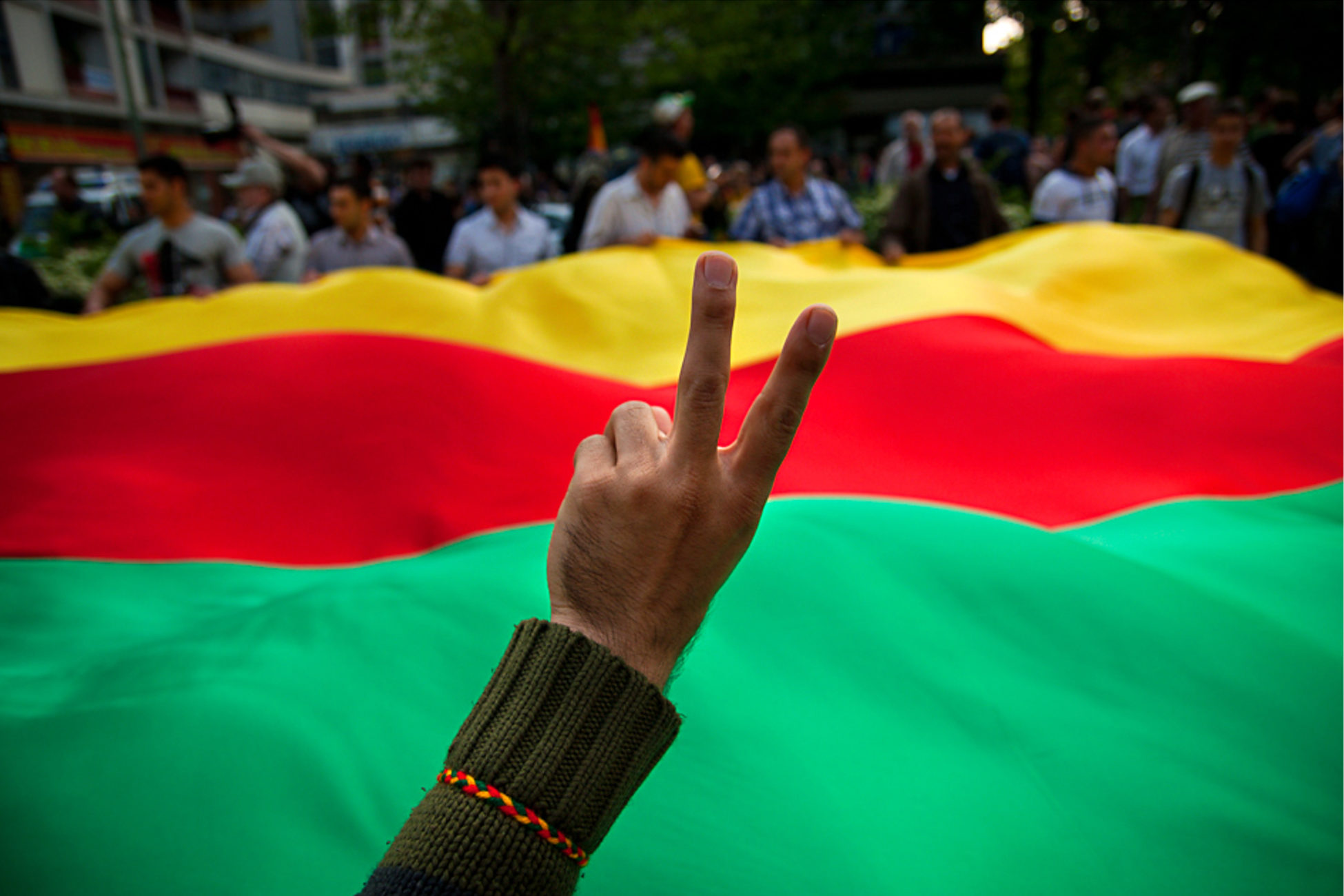 In her essay “On Revolution”, political theorist Hannah Arendt analyzes and compares the French, American and other revolutions to determine the “outstanding characteristics of the revolutionary spirit”. She recognizes these within the possibility of starting things with a new beginning, as well as in people’s collective action. Arendt is especially concerned with the question of why this “spirit” (Geist) failed to find lasting “institutions” and was lost in the revolutions. Elsewhere, Arendt writes:

“When I say that none of the revolutions which toppled one state-form and replaced it with another, were able to shake the notion of state, I refer to something that I have elaborated in my book on the revolution: since the revolutions of the 18th century, every greater upheaval developed an approach of a state-form, that immediately stemmed from the revolutions themselves, independent from all theories, namely from the experience of collective action and the wish to co-determine. This new state-form is the council system, which, as we know, perished every time and everywhere, destroyed either directly by the nation-state bureaucracies or by the party bureaucracies (…) It seems to me however as the only alternative to have historically emerged and to constantly re-emerge. One can verify the emergence of spontaneous councils in all revolutions; in the French revolution, in Jefferson during the American Revolution, in the 1870 French Revolution, in the Russian Revolutions, during the revolutions in Germany and Austria at the end of World War I, and finally in the Hungarian Revolution;  namely, they never emerged due to a conscious, revolutionary tradition or theory, but completely spontaneously, every time as though such a thing had never existed before. Thus, the council system seems to really be in the nature of action” (Hannah Arendt, Power and Violence).

Considering Arendt’s theses, I want to elaborate on the revolution on Kurdistan and especially focus on the Kurdish freedom movement’s paradigm shift, the role of the Kurdistan Workers’ Party (PKK) and their main theorist Abdullah Öcalan. I consider the revolution in Kurdistan alongside the major revolutions of humanity, due to the explosive power inherent to it owed to its geographically central location, but also due to its notion of revolution and its social paradigm. The PKK central committee formulated this claim in its Mayday statement, which stated that the revolution in the Middle East will open the gate to the world revolution. However, the revolution that is being driven by the PKK holds several significant differences to the other prior experiences described above by Arendt.

(1) Democratic Confederalism as an alternative to State

With the paradigm shift that was initiated in the early 1990s, especially informed by the theses of Abdullah Öcalan, the Kurdish freedom movement overcame notions of a socialist Kurdish nation-state, shaped by realsocialism, and placed emphasis on a paradigm based on democracy, ecology and women’s liberation. In 2005, Öcalan announced a strategic re-orientation of the PKK with the “Declaration of Democratic Confederalism”.

Ever since, the PKK pursues what it describes in its programme as the “solution model of Democratic Confederalism which relies on the grassroots-organization of the Kurds all all peoples in the region”. The new paradigm of the Kurdish movement – in the words of Arendt –formally shakes the notion of State. Thus, Öcalan defines the State as an entity outside of society, as the “temporary ceasefire between society and power” (Abdullah Öcalan, Manifesto for a Democratic Civilization). Öcalan further elaborates: “Without equation with state power, without pretending things in the name of the people or the proletariat, the democratic self-administrations come closest to posing a model for a right solution. It is the essence and the difference of democratic self-administration to neither become a State in the name of the people, nor remain a mere appendage of the State.”

At the highest level, the congress is seen as the basic form of democratic organization, while local communes, cooperatives, civil society organizations, human rights institutions and communal structures function at the grasroots level. The experiences in Northern Syria present a practical model in this sense. Before the Turkish invasion of Afrin in January 2018, following the first two stages of elections in 2017 (the commune co-presidency elections and councils), the voting for a people’s congress was planned, based on an organizational principle that starts from below and progresses towards higher instances, eventually leading up to a congress. “Our formula claims: ‘state plus democracy’ – with the aim of shrinking the state and  exanding democratic society”, as stated in an interview with Duran Kalkan, member of the executive council of the Union of Kurdistan Communities (KCK). According to activists from Rojava/Northern Syria, this does not merely indicate the State in the form of the Assad-regime, but above all, the statist mentality in people’s own minds.

(2) The party of Democratic Modernity

While the PKK defended the mission of the classical Marxist-Leninist vanguard organization before its paradigm shift, it now articulates its mission as being a “guide for Democratic Modernity”. In its programme, the main mission of this “new avantguard” is viewed in the satifaction of especially the mental needs of the three main pillars of the system: the economic, ecological and democratic society (municipal, local, regional, national and transnational democratic confederalism) (Abdullah Öcalan, Manifesto for a Democratic Civilization).

The PKK regards the existence of the party under capitalist conditions as necessary until society becomes an independently functioning entity. Limiting the lifetime of the party to the self-empowerment of society entails great faith in the power and potential of society. Society is seen as able to independently solve all problems. Society is thus a force of solution and is not seen as an “unconscious, steerable mass”.

The task of the revolutionary is to unfold this potential within statist society. For, the statist-capitalist system hinders the power of society from realizing itself. For this reason, the Kurdish movement believes that the role of revolutionaries is not the creation of a new society, but the removal of obstacles that keep the emergence of the already-existing society. The re-claiming of spaces by the ethical-political society constitutes the true revolution. This society had been pushed to the background and kept low by the hegemony of the 5000-year-old central civilization, which climaxed in the 400-year-old age of capitalist modernity.

From this perspective, it is obvious that a revision of oppression cannot come about as quickly as the pushback of the so-called Islamic State from Rojava. Society requires ways and methods to set free its potential. Finding these is the task of revolutionaries. Xebat Andok, member of the PKK central committee writes the following on the meaning of the paradigm: “Surely, we would have met the same fate as the KDP [Kurdistan Democratic Party] and the PUK [Patriotic Union of Kurdistan], had we not induced a paradigm shift. Because a fight for nation-statehood is a fight for capitalism” (PKK Homepage).

Similar to Arendt, the leftist theorist Murray Boockin, who influenced Öcalan’s ideas for the paradigm shift to an important degree, engages with the American, French and Russian Revolutions in his worthwile work “The Third Revolution” (Murray Bookchin, The Third Revolution: Popular Movements in the Revolutionary Era, Vol. 3). In the introduction of the book, Bookchin describes how the names, deeds and ideals of the revolutionaries, who wanted to lead these revolutions towards libertarian societies, were equated with tyrants such as Robespierre or Stalin. According to Bookchin however, we need to refocus on the revolutionaries above all, who directly led the democratic organizations. With this assertion, he shifts the view on the revolutionary processes of the past. The “first revolution” begins with the uprising of the broad popular masses that chase away the old regime, after which the “second revolution” takes off. The “second revolution” ends with political power concentrating in the form of a central state and the working society, which realized the first revolution, being excluded from decision-making processes. This is followed by the direct democratic organization of society which desires to re-gain the lost political power. This movement that wants to drive the “third revolition” is the actual dynamic that Bookchin wants to engage with more closely.

He takes the Kronstadt Rebellion of sailors in 1921 as example from the Russian Revolution to reflect on the conflicts between the revolutionary party and the communalist structures of society, which concretized in the slogan “All power to the soviets – no power to the party”. Öcalan, who disagrees with the Leninist notion that under the conditions of imperialism, the party can only exist if it holds power, defines the new role of the PKK as a driving force of the “third revolution” in the following manner: “It takes over a leadership role in social movements with a programm that aims for the transformation towards a democratic, free and egalitarian society, a common strategy for all societal groups that have an interest in this programm, and a tactic that strives for the broad organization of civil society, environmentally-concerned, feminist and cultural groups and which does not neglect legitimate self-defence along the way” (Abdullah Öcalan, In Defense of a People).

Just as the revolution and the building of communal self-administrations in Kurdistan are no spontaneous events, the revolutuionaries of Kurdistan have a conscious, revolutionary tradition and theory. In the PKK Academy’s monthly magazine Komunar, the Apoist conception of history is explained in the following way: “History carries the character of Democratic Civilization more than we think. When history is read on this basis, one can find an incredible amount of ideological interdependences and systematic structures, as well as organized-ness”.

The history of the Middle East in particular is abundant of local, communal movements. Who knows personalities and movements such as Zoroastrianism, Mithraism, Manichaeism, the Mazdakists, the Khurramites, Bābak Khorramdin, the Ismailites, Hasan-i Sabbāh, the Qarmatites, the Zanj Movement, Mansur al-Hallaj, Shahab ad-Din Yahya ibn Habash Suhrawardi, Baba Ilyas, Pir Sultan Abdal und Shaikh Bedreddin, whom the Kurdish movement considers as their revolutionary heritage? The history of societies’ fight against the state is not only located in the Middle East, but also in the Greek and Italian autonomous city movements in Europe, the uprising of the Castilian cities in Spain and the municipal movements against absolutism, the American and French revolutions, the experience of the Paris Commune, the role of the councils in the October revolution, the ecological and anarchist-oriented notions of communes after the 1960 and especially in 1968, the freedom quest and communal orientation of the Zapatista movement, the landless movement, the social forums and similar local and trans-regional inititatives all around the world. Thus, a statement of the Democratic Federation of Northern Syria states that it derives its strength “from the rich culture of Mesopotamia and the democratic communal structure of natural society, which, since the clan system and throughout its entire history, resisted the societal form of a centralizing state” (document of the Democratic Federal System of Rojava-Northern Syria).

Alongside this conscious revolutionary tradition, the PKK is also in possession of a theoretical approach “outside of any classist, hiearchical state power” (Abdullah Öcalan, In Defense of a People). This approach defends the thesis that it is not class struggles alone, but also the great resistance of communal societal values that function as motors for societal progress.

In Arendt’s words, the PKK’s paradigm change, too, is a result of “common action” and “desire to co-determine”. The PKK’s engagement with socialism is the search for an answer to the question of why the “revolutionary spirit” failed to find institution until now. The collapse of realsocialism, the question of women’s liberation and the development of national liberation movements, which the PKK had taken as examples, constituted a special impulse for this re-orientation. With its notion of socialism for the 21st century, the PKK presents an answer. This encompasses a new anti-capitalist concept of administration; a party, which pushes for the “third” revolution, namely communalization against statist tendencies; and a revolutionary theory and new conception of history.