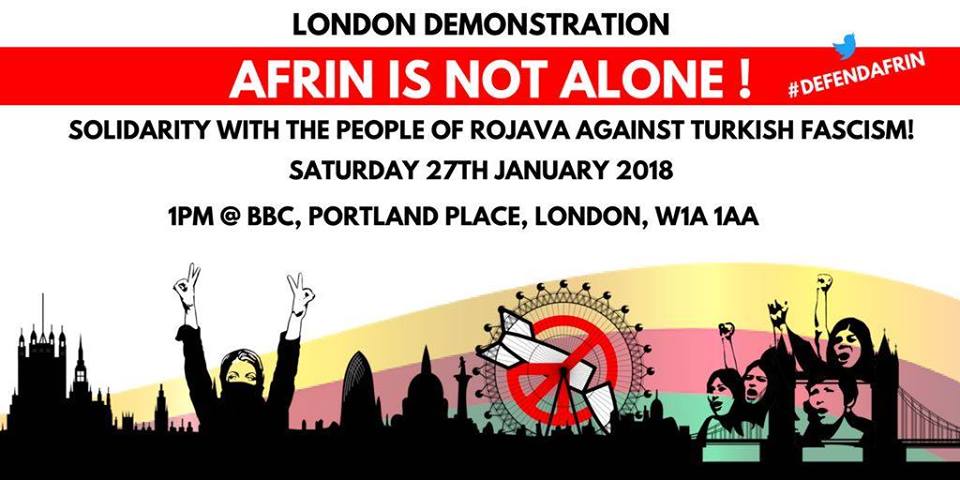 This is urgent. Turkey has begun a ground and air military offensive against the people of Afrin and North Syria.

Afrin is a predominantly Kurdish region of North Syria, and is also home to hundreds of thousands of internally displaced people ─ refugees who have already fled other parts of Syria. Other parts of North Syria are also under attack.

It is clear that Russia has given permission for Turkey to use Syrian airspace and Turkey are now, as you read this, bombing the Kurdish city of Afrin, which until a few days ago was one of the safest places in Syria. Many civilians have been killed. Many children have been killed.

The UK foreign secretary Boris Johnson has made a statement supporting the Turkish attacks, despite the Kurdish-led SDF forces being the UK’s most successful anti-ISIS coalition partner. This is a dark and shameful day for the British government.

On Saturday we will march to 10 Downing Street.

We will rage and expose these policies, which lead to the killing, maiming and wholesale destruction of so many innocent people and their homes and livelihoods.

While our governments are more interested in forging arms deals to dictatorial regimes, it is time for people of the UK to show their solidarity with the Kurdish people and tell the UK Government, “Not in my name”.