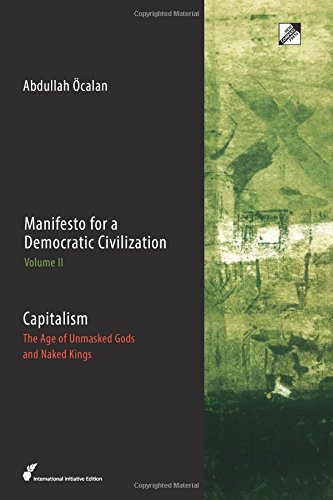 The book was translated by Havin Guneser; the preface was written by Dr Radha D’Souza. 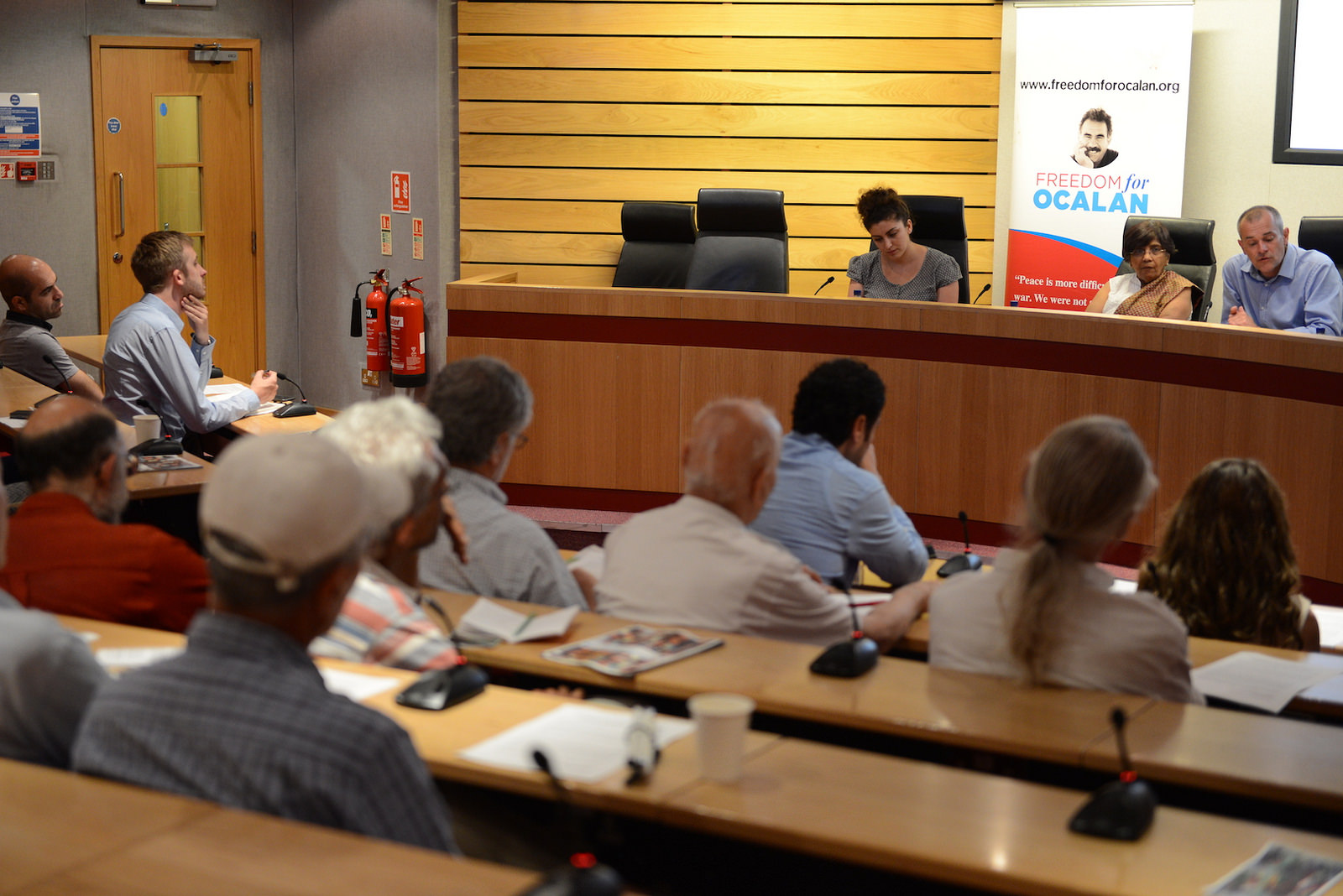 The launch of the English translation of this important work was hosted in London by Unite the Union and supported by Peace in Kurdistan and Centre for Kurdish Progress on 19 June 2017. Approximately 50 people attended. Unite, along with the GMB union, launched the Freedom for Ocalan Campaign in 2016. Opening the meeting, Simon Dubbins, International Director of Unite, described Abdullah Ocalan as ‘one of this century’s and the past century’s biggest political thinkers’ and emphasised that Ocalan’s release is essential to any meaningful negotiations towards peace in Turkey and the Middle East. Dubbins described his visit to Diyarbakir and how he witnessed ‘the brutality and unrestrained violence of the Turkish state’ towards the Kurdish people, for whom Ocalan is their leader. Unite has come to recognise the significance of the Kurdish struggle in the Middle East, and in Britain the Trade Union Congress passed a resolution on trade union rights in Turkey, which included demands for the recognition of Kurdish rights and freedom for Abdullah Ocalan. Simon Dubbins introduced presentations by Dilar Dirik and Radha D’Souza.

Dilar Dirik, a Phd student at the University of Cambridge, addressed Ocalan’s writings and said that this second volume is one of five books written as part of his self-defence, while held as a prisoner by the Turkish state on Imrali island. Dilar outlined the conditions in which Ocalan is held, his isolation and denial of elementary legal rights, and Ocalan’s efforts to initiate a peace process. She stressed that Abdullah Ocalan views his own isolation as integral to the isolation of the Kurdish issue; they are inextricably linked. In the same way, the fate of Ocalan is tied to fate of the Kurds, which is in turn the key for the prospects for democracy in Turkey.

In his first volume, Civilisation: the Age of Masked Gods and Disguised Kings, Ocalan explains that in order to understand contemporary capitalism and overcome it we must understand previous societies, going back to the emergence of patriarchy. Dilar said that Ocalan traces systems of hierarchy and domination back to the development of the City state, some 5,000 and more years ago. She said that Ocalan sees that there was always an alternative stream within these societies that contributed to their cultures. In the third volume, on a Sociology of Freedom, Abdullah Ocalan says that we need to re-examine how we look at religion, mythology and philosophy in order to realise the potential that is carried within the alternative over the ages. The fourth and fifth volumes explore the Kurdish people’s situation and propose a democratic confederal system as a way of overcoming the hierarchical and domineering nation state. This is not just a way forward for the Kurds but also for the wider Middle East and the world.

Dilar pointed to achievements in Rojava where Ocalan’s theories have been put into practice. Here women are central to their own emancipation, the re-ordering of society and practice of everyday life. Dilar concluded by referring to the dehumanisation of society under capitalism and its tragic manifestation in the recent burning down and death in Grenfell Tower, London. We need to organise, she said. 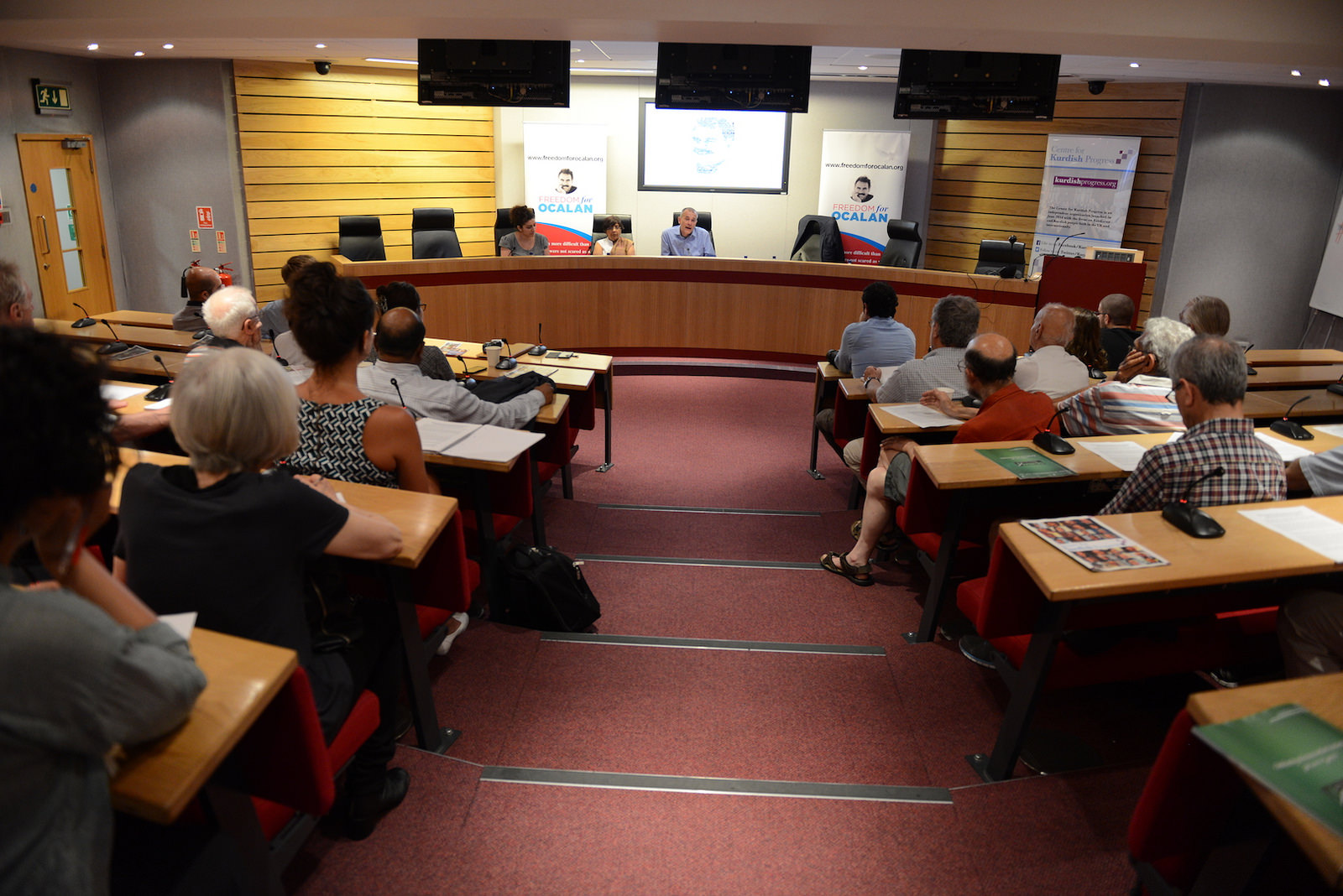 Dr Radha D’Souza works as an academic; she teaches law and campaigns for social justice. Radha began by reinforcing the view that Abdullah Ocalan is an important thinker and that this second volume of the Manifesto for a Democratic Civilisation is a deeply philosophical book. Following Ocalan, Radha said that it is necessary to undertake philosophy to do history, and to do sociology it is necessary to do history and without sociology you cannot conduct politics and without politics we cannot change our conditions – hence philosophy is essential to us and the way we live.

Radha asked ‘What is the problem he [Ocalan] wants to address?’ She instanced national liberation movements that demanded a state, but then upon achieving power the state ends up oppressing people and not liberating them. Coming from South Asia, Radha explained that India had an enlightenment tradition going back to the thirteenth century onwards until the times of the East India Company in the eighteenth century. This tradition inculcated an aspect of rebellion in people, saying: do not seek to seize state power but be prepared to rebel. She noted that in the earlier part of the twentieth century, the movement against the Empire in India did not want a unified centralised state, foreseeing this as a potential disaster, but wanted a confederal solution instead. The movement used the words ‘democratic confederation’ and said that India was multi-lingual and multi-cultural and that a centralised state would be destructive. Radha said that she found Ocalan to be very much a thinker and writer of the East.

Abdullah Ocalan asks what makes societies and communities hang together, and he answers: the need to survive. Repeating Ocalan, Radha said that capitalism destroys the conditions of human life; the struggle is no longer about the state but is about human survival. Capitalism saps our ability to rebel, in particular it promotes individualism. With the democratic confederalism that Abdullah Ocalan proposes communities must come together to organise politically, economically and culturally. In the struggle for communitarianism, old structures and traditions still survive and can contribute. ‘It is time for another liberation struggle’ concluded Radha.

Given the perilous state of the Middle East, the critical juncture for the Kurdish struggle and the fact that Abdullah Ocalan has been held in prison since 1999 and given the scope of his writings, questions and contributions from the audience were wide ranging. Estella Schmid from Peace in Kurdistan made the essential point that Ocalan’s ‘thinking comes out of practical issues that have to be confronted’. The books are not final statements but are work in progress. Ocalan puts different aspects of the Kurdish struggle into words, for example the situation in Syria is not the same as in Turkey, so how do you find alternative ways forward for different settings? How can Ocalan achieve a definitive document when he is isolated and imprisoned, denied access to discuss his ideas with others, denied access to many texts that he could use?

Other contributions raised the issue of Kurds and alliances, the relation to the United States, the character of Barzani and the Kurdistan Regional Government, the growing international prestige of the Kurdish struggle and of Abdullah Ocalan. One contributor warned that Turkish President Erdogan wants to restore the death penalty in Turkey and that this is a threat to Ocalan’s life, just as the stance of the Turkish state is killing Kurdish people today.

In his summing up, Simon Dubbins remarked that for the Kurds to have achieved what they have done in Rojava, with women and youth at the forefront, deserves our praise and that for Ocalan to have written the book under such isolation is a ‘truly remarkable achievement’. The overriding message from the book launch must be that we spread the word about the Kurds and Abdullah Ocalan, we get more people involved supporting their struggle and we discuss and we learn as we do so – using the tools and lessons that they are providing us with. Yes, it is time for another liberation struggle. 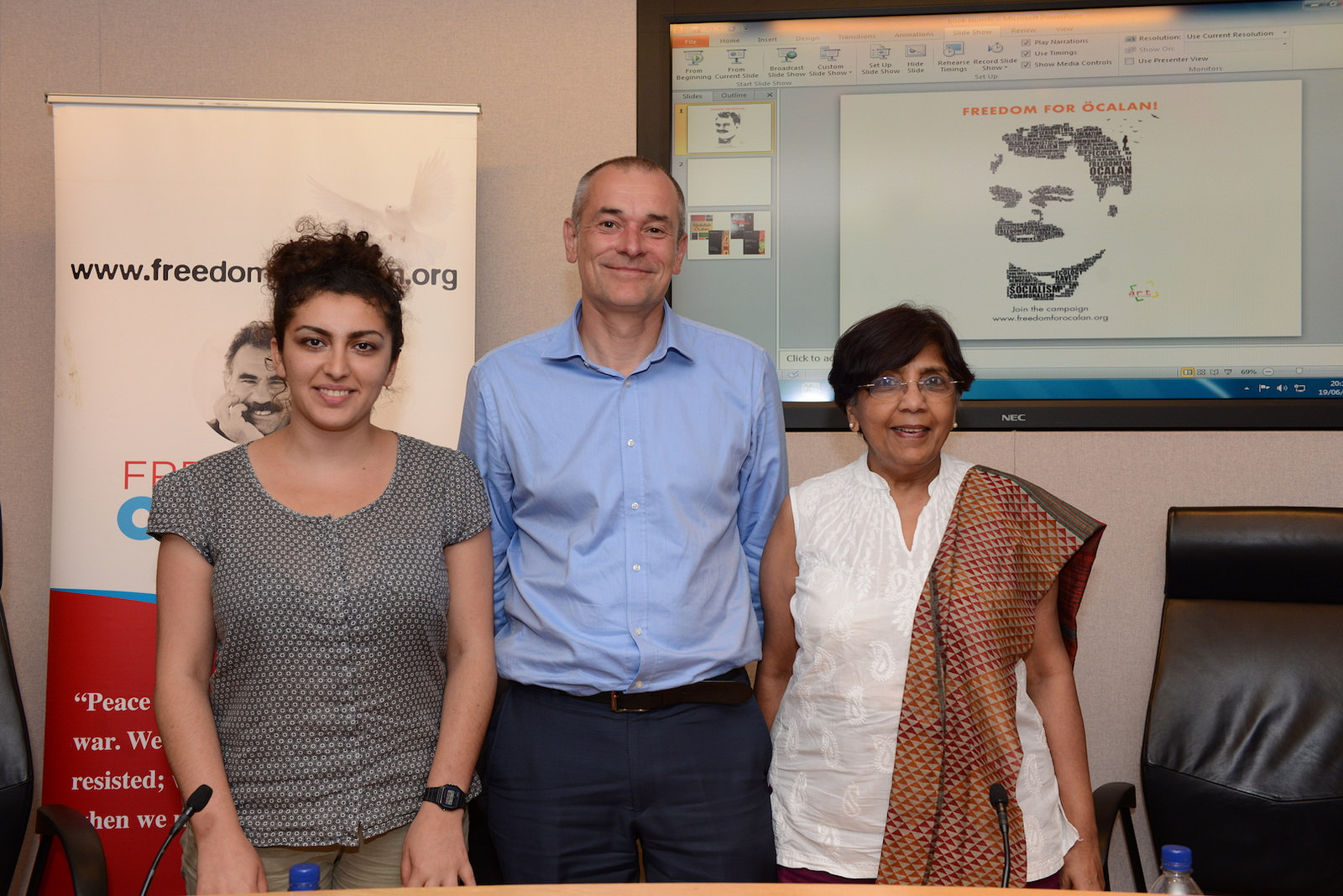