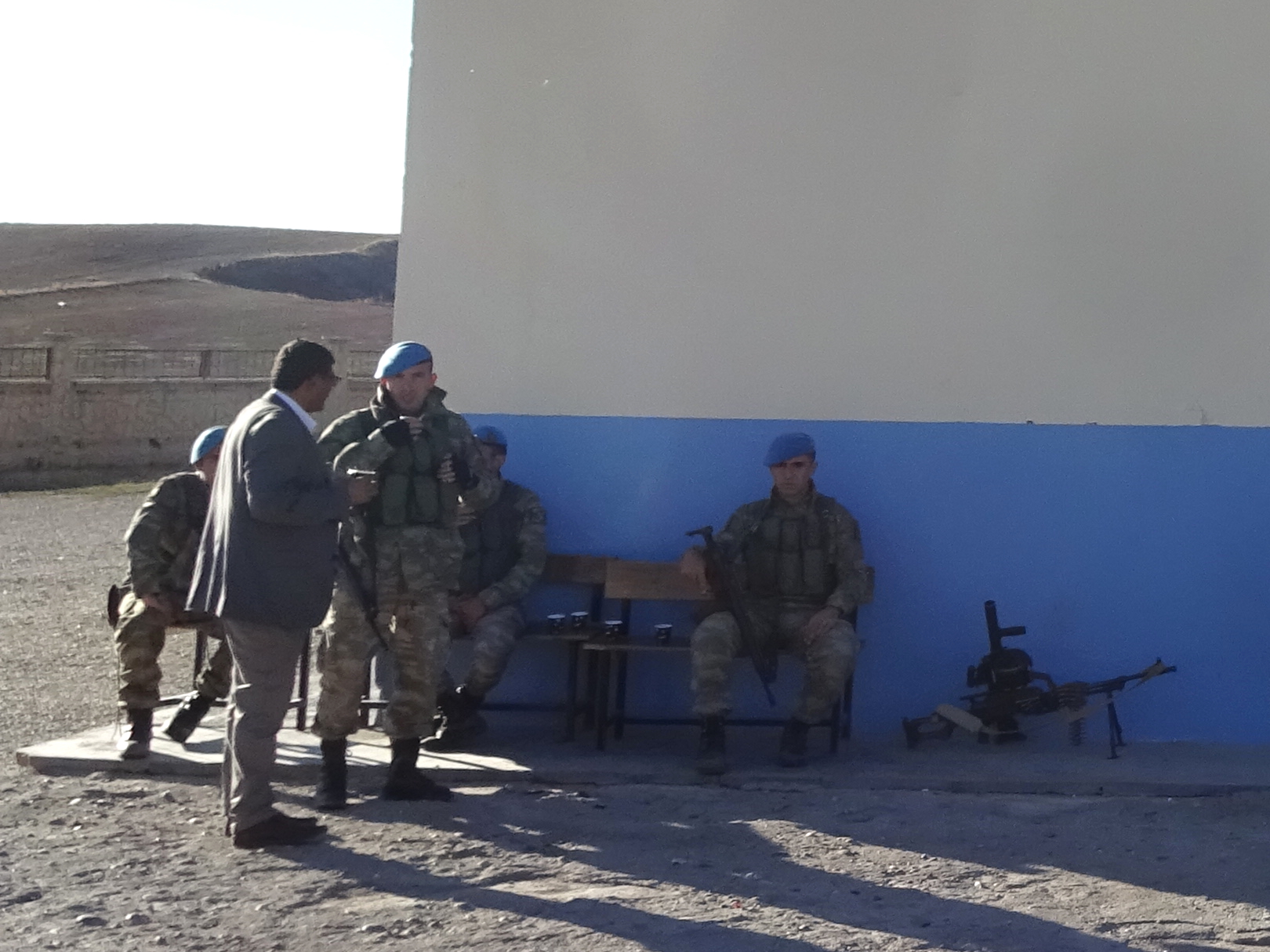 On the 1st of November 2015, we travelled from the UK to Siirt, in North Kurdistan – the mostly Kurdish region in South Eastern Turkey – as one of several delegations who arrived there to observe the Turkish elections.

These were the second elections of 2015, after the ruling AKP lost their absolute majority and the HDP – a pro-Kurdish party – won parliamentary representation in the June election. The November elections were held in an atmosphere of fear and uncertainty following renewed attacks on Kurdish groups from both state and non-state forces within Turkey, alongside widespread repression of opposition media and political forces.

Volunteer electoral monitors came at the invitation of the HDP, who had been concerned about the very real possibility of fraud and intimidation of voters on polling day. One of our groups was sent to Baykan and Kurtalan areas, to the north of Siirt. During election day this group visited nineteen polling stations. Another of our groups was sent to the Pervari regions, east of Siirt, and visited three polling stations. The findings of both groups are detailed below.

In the Baykan and Kurtalan areas, we accompanied a delegation of elected officials from the HDP party. A strong police and military presence was witnessed all across these areas, with police concentration in cities and larger towns, and military and village guards in villages and rural areas.

In a total of three places in the Baykan area, we were denied entry by police or military, each time told that our names were not to be found on the list of people who were allowed to enter the polling station. At Cumhuriyet primary and secondary school in Baykan, police demanded to see our passes to prove that we had permission to enter. HDP party delegation members debated with the police, and we were briefly granted entry. We made it as far as the first voting room – in time to see a soldier in full combat uniform drop his vote into the ballot box whilst uniformed and plainclothes police removed us from the school.

The second station that we were denied entry to was near Cumhuriyet Ortaokulu, a school called Baykan İlçe Halk Kütüphanesi. Some of the same plainclothed police from the previous school had followed us there. We were told that we could not enter because we were not on their list, and that we should not attempt to enter any other polling stations.

The third station that we were denied entry to was in a village in the Siirt-Baykan area, a school called Sarısalkım Ortaokulu/ İlkokulu – both a primary and secondary school. A group of six soldiers armed with Heckler & Koch G3s were sat on small hill immediately adjacent to and overlooking the school. This was the first time we had seen soldiers next to a polling station. Two of the soldiers entered the courtyard just after we had arrived with the delegation, and told us that we were forbidden from entering the building.

The police we saw in the Baykan areas were almost all armed with handguns, and some carried automatic rifles. At the first school we were denied entry to, two automatic rifles with grenade launchers attached were propped up against a wall behind four police sat at the school’s main entrance. The village guards we saw – in both the Baykan and Kurtalan areas – generally carried Kalashnikov rifles, and the soldiers in the same areas carried Heckler & Koch G3s. In front of one school in the Kurtalan area – Kayabağlar Çok Programlı Anadolu Lisesi – a light machine gun stood on the ground with a British-Canadian Arwen 37 grenade and tear gas launcher behind it, and four soldiers carrying G3s sat to the side.

At several of the polling stations in the Siirt-Baykan area, we saw police or military vehicles parked within the grounds of the schools, often close to the entrance.

At the Arınç İlkokulu – a primary school in the town of Ziyaret near Baykan – a 4×4 with a machine gun turret was parked right in front of the main entrance to the school. We saw another similar vehicle parked outside the polling station at Baykan İlkokulu, another primary school.

A police car was parked right next to the entrance of the Gazi Mustafa Kemal primary and secondary school.

An armoured personnel carrier (APC) was parked in front of Kız Yatılı Bölge Ortaokulu, a secondary school in the Baykan area. Police were also nearby.

Of the nineteen polling stations we visited in the Siirt-Baykan and Siirt-Kurtalan areas, most were schools, and without exception, outside all the stations we saw either police or military.

Along with the APC mentioned previously, there were several police in the courtyard of Kız Yatılı Bölge Ortaokulu secondary school in Baykan.

Over ten police were noticed in the courtyard of Veysel Karani Ortaokulu, a primary school in the town of Ziyaret, Baykan.

In the courtyard of Atabağı Ortaokulu, a secondary school in the Baykan area, we counted three soldiers and five village guards standing in the courtyard.

At 30 Ağustos Zafer İlkokulu, a primary school in the Baykan area, we noted two soldiers and three village guards stood in the courtyard.

In the courtyard of Vakıfbank Nizamettin Sevgili Ortaokulu, a secondary school in the Kurtalan area, we noted six soldiers with blue berets carrying G3s, two of whom entered a polling room as we were leaving. This school was next to the Kayabağlar Çok Programlı Anadolu high school, with the heavy weaponry depicted earlier.

At least six military were seen in the courtyard of Aktaş İlkokulu, a primary school near Siirt.

In many cases, the security forces presence in the courtyard of the polling stations were clearly visible from voting room windows, some of which were very close to polling booths.

The military and police presence we saw in these regions served not only to intimidate us as election monitors – so much so that after being removed from and then refused entry to two schools, come the third we voluntarily didn’t attempt to enter, to avoid any potential confrontation with the police there – but locals told in several places of as many as fifty people in their town or village who hadn’t come to vote because of the security forces presence. In one instance, we entered a polling station at Yukarı Tütenocak İlkokulu primary, only to find a room of soldiers and village guards sat at tables eating lunch, right next to the polling booths. A local official, required to remain present at the voting table throughout the election, was not at the station, as rather than have his lunch there amongst the soldiers and village guards, he chose to disregarded his duty and left to eat at his home.

As the group of election monitors sent to Pervari, we were refused entry into the first school that we went to. We were told that we were not on a list to monitor the elections, and that we should have arranged to be on the state-approved list. An hour later, we walked to a second school, where a massive armoured personnel carrier waited outside the school gate. We tried to go inside and were immediately turned away. The police officer told us that it would be impossible to gain entry.

We were told about problems with fraud in Pervari earlier on in the day. A man had managed to vote without showing his identification and had been spotted doing this and was reported.

Throughout the Siirt-Baykan, Siirt-Kurtalan and Siirt-Pervari areas of North Kurdistan, marked intimidation by the mere presence of police and military at polling stations was clear to those of us acting as election monitors this November 1st 2015 election in Turkey.