Save Hasankeyf! Save the Iraqi Marshes! Stop the Ilisu Dam! Demonstration at the UK Commission for UNESCO, Monday 21 September

(For more information about the campaign against the Ilisu dam, read Corporate Watch’s report and visit the Initiative To Keep Hasankeyf Alive)

Today (Monday) we gathered in London to demonstrate at the UK Commission for UNESCO’s office. We demonstrated in solidarity with our Kurdish friends as part of World Hasankeyf Day, which was yesterday. We chose to move our action to the Monday so that UNESCO’s office would be open.

Our message was simple: for UNESCO to help us to save Hasankeyf and the Iraqi Marshes, and for UNESCO to acknowledge the urgency of starting dialogues with Turkey about these precious places before they disappear forever under the waters of the Ilisu dam. Our intention was to deliver letters to key UNESCO UK-Commission staff.

We demonstrated outside of UNESCO’s office, close to Downing Street, for a couple of hours, giving out leaflets to the public and to government staff as they walked past on their way to work. We were joined by comedian and activist Mark Thomas.

“I’ve seen you on the TV!” a member of the public said to him.

Batman Ecology Assembly in Kurdistan had asked us if we could get some famous names, such as Noam Chomsky to this event in London, but Mark was a great second-best!

Initially, we were told that the UK Commission for UNESCO would not accept our letters. We made an announcement on our megaphone to passers-by about Hasankeyf, and talked about the 78,000 people being displaced, and about the political motives for the dam. Eventually, two of us were invited inside to talk to UNESCO staff.

We spent about twenty minutes inside, talking to the very helpful and friendly staff, who read our leaflet and agreed that action should be taken to save Hasankeyf. They told us to write to John Whittingdale, Secretary of State for Culture, who they said would have a voice within UNESCO. However, they said that they couldn’t personally give our message to him, and couldn’t bring up our concerns to either UNESCO or John Whittingdale.

“It is not possible for the UK Commission for UNESCO to bring up the issue of Hasankeyf with the UK Minister for Culture or with UNESCO because we only provide advice if we are asked to provide it, and if it’s under UNESCO’s remit. We give expert advice only when it’s asked of us. When the UK government asks us to look into something, we do that. We are not in positions of power to act.”

Despite refusing to hand our letters to their staff, they took our flyers, patiently answered our questions, and explained about UNESCO’s organisational set-up.

Afterwards, we took our demonstration to Whitehall, with the intention to stand in front of the entrance of Horseguards Parade with our banners. Within seconds of holding up our banners, a soldier moved his horse towards us.

Brandishing his sword at us, he shouted:

“PUT THE BANNERS AWAY NOW. You can not demonstrate here. You are using the Ministry of Defence to promote your message.”

Seconds after that, a police officer came and shouted at us. With one hand he grabbed our banner, whilst he kept his other hand on his gun. 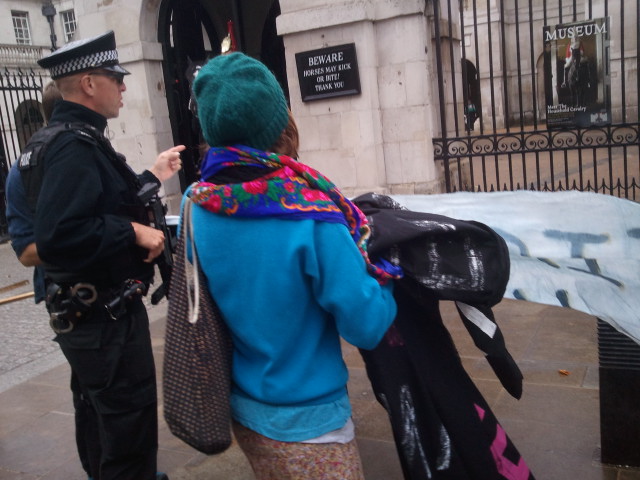 A few of us moved onto Trafalgar Square and held up our banners in solidarity with our friends in Kurdistan.

We then posted letters to Irina Bokova, UNESCO Governor-General in Paris; to ICOMOS UK (advisors to the World Heritage Committee) in London; to IUCN (advisors to the World Heritage Committee) in Switzerland; and we also posted our letters to the UNESCO London staff, as the office staff had refused to accept them. At the same time, we posted campaign postcards to Free Shilan Ozcelik, an eighteen year old woman from north London who is being unjustly held in prison by Britain, accused of wanting to join the Kurdistan Workers’ Party (PKK) to fight ISIS.

Tomorrow, we will also post letters to the Secretary of State for Culture, John Whittingdale, and to Kishore Rao, Director of UNESCO’s World Heritage Centre in Paris. We will publish any replies that we receive.

Today was just one action in our attempt to help to save Hasankeyf and the Iraqi Marshes. We have many other ideas, and we will not forget our friends in Kurdistan. Although we are taking these initial steps today, we know that if we are going to save the Tigris valley we will need global solidarity and we will need to use a diverse range of tactics.

In solidarity,
Activists and supporters of the Kurdish struggle in the UK.

Below is the letter that we have sent to Irina Bokova, Director-General of UNESCO in Paris, and others:

We are writing to you today to draw your attention to the call for Hasankeyf and the Iraqi marshes to become a World Heritage Site. This letter has been posted at the same time as global demonstrations to try to draw attention to the plight of this precious area on the Tigris river, and to put culture and nature before big business.

The 12,000 year old town of Hasankeyf sits on the mighty Tigris river in north Kurdistan, in ancient Mesopotamia, which lies in modern-day south-eastern Turkey. One of the oldest civilisations in the world, Hasankeyf will disappear forever when the Ilisu dam is completed. The dam will flood or partially flood 199 villages and will displace up to 78,000 people. The dam is currently 90% complete.

Hasankeyf fulfills nine out of the ten criteria on the specifications to be designated a World Heritage Site, and it was one of the most important settlements in Upper Mesopotamia for a long time. Archaeological investigations are still ongoing in Hasankeyf, and recent excavations uncovered remnants of Hurri and Mitani civilisations. Hasankeyf is full of monuments and ancient buildings, and until recently humans still lived in many of its 5,000 caves.

Hasankeyf castle was constructed by Constantine the Great, and the area around the castle contains palaces and mosques. The Great Palace was constructed during the Roman Empire, and excavations are still continuing. The Great Mosque was build by the Ayyubids in 1325 AD and is the oldest structure of the Islamic period. The 40 metre-high minaret of the El Rizk Mosque is a wonder of engineering, and is elegantly adorned with Islamic calligraphy and engravings. These are just a few of Hasankeyf’s remarkable wonders which are threatened by the Ilisu dam.

The Iraqi marshes of Southern Mesopotamia are also under grave threat. Thousands of years of culture will be affected. The area is already subject to severe droughts, and the state of the marshes is deteriorating with each day that goes by. The Ilisu dam, and its sister dam, the Cizre dam, will create a desert and lead to the forced migration of local people from their homeland.

A UN resolution was approved in May 2015 in order to “Save Cultural Heritage in Iraq”. This resolution had strong support from United Nations Deputy Secretary-General Mr Jan Eliasson and yourself, the UNESCO Director-General. We believe that the Iraqi marshes should not be ignored in this vital resolution. During this meeting of the UN General Assembly, the Minister of State at the Federal Foreign Office of Germany, Ms Maria Böhmer, stated that “Iraq is a cradle of our common civilization… Its heritage has been entrusted to the care of all of mankind.”

On September 8th 2015 you participated in an International Conference on the Protection of Victims and Ethnic and Religious Violence in the Middle East. We strongly believe that Kurdish culture, which has been repressed for many years, and is being destroyed by Turkey’s dam-building, must not be forgotten in these discussions. The Ilisu dam is just one of 22 dams in Turkey’s Southeastern Anatolia Project (GAP). The dams will mostly affect Turkey’s Kurdish population, flooding their villages, livelihood and eradicating Kurdish culture. The Tigris and the Euphrates rivers’ fragile eco-systems will also be destroyed by these dams.

For a location to become a World Heritage Site, the State Party of a country should compile a list of sites to be considered for inscription. However, Turkey will not apply for Hasankeyf to become a World Heritage Site because it is intent on completing the Ilisu dam. Therefore, we ask UNESCO to visit Hasankeyf and to review this unique area, independent of an application from Turkey. We would like to stress that the need for action is urgent, as the Ilisu dam is almost complete.

We hope that you will listen to our concerns and help us with our campaign to save Hasankeyf, the Tigris river and the Iraqi marshes before it is too late.

Activists and environmentalists from the UK