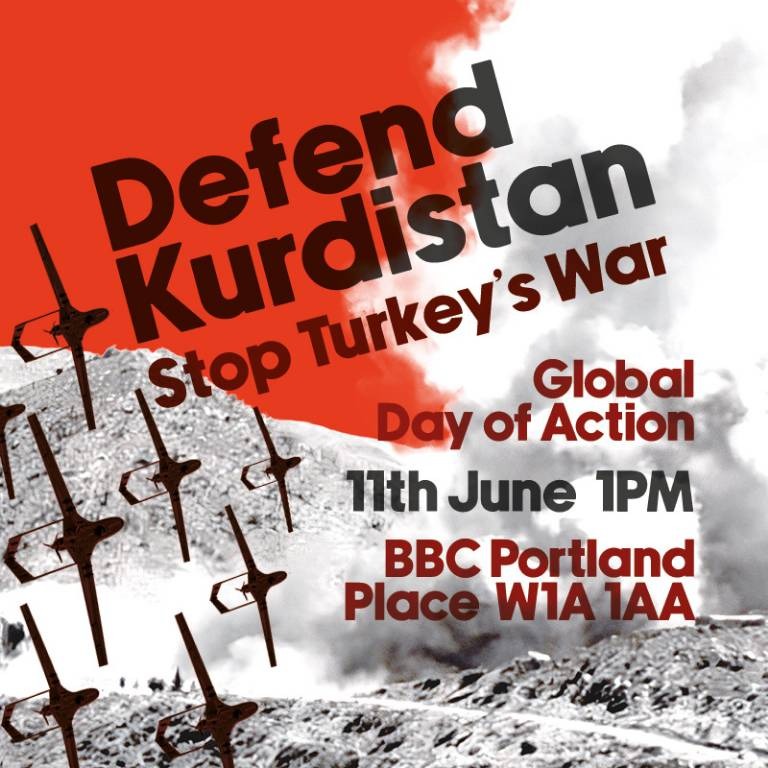 We are asking you to join Kurds and their friends and supporters for a major demonstration in London on 11 June at 13.00, starting from BBC Portland Place.

We will march on Downing Street and deliver a letter to UK Prime Minister Boris Johnson, demanding the UK stops its support for Turkey’s ongoing and bloody war against the Kurds, which kills 100s and displaces 100,000s of Kurds as part of a policy of ethnic cleansing; destabilizes the region and allows ISIS to revive; and jeopardizes the Kurds’ struggle for self-determination, democracy, and gender liberation.

WHY must we act now to Defend Kurdistan from Turkey’s new invasion?

Turkish President Erdogan is using the crisis in Ukraine as a pretext to demand the green light for a fresh invasion of Rojava, the Syrian Kurdish region he attacked and occupied swathes of in 2018 and 2019. Another military operation against Iraqi Kurdistan is already underway.

Turkey’s aim is simple: to ethnically cleanse and occupy a 1400km strip of territory in Iraq and Syrian occupied Kurdistan. Turkey has already built several military bases in Iraq in violation of international law, and occupied thousands of square kilometres in Syria with the help of jihadist militias including many former ISIS members.

For the Kurds and their struggle for democracy and self-determination, this war is a question of existence – or annihilation.

HOW is Turkey getting away with its deadly assault on the Kurds?

Western Governments, and the UK in particular, are responsible for this war. Turkey relies on Western tech to conduct deadly airstrikes on the Kurds. Turkey uses its role as NATO’s second-largest army to win support from the West for its existential war against the Kurds.

NATO, the UK and the West are not just silent in the face of Turkey’s violations. They need an authoritarian, capitalist, nationalist bulwark in Erdoğan’s Turkey. They are terrified of the Kurdish movement’s vision of a decentralised, democratic, egalitarian Middle East.

but Western governments continue to ban, imprison and legally harass those working for a free Kurdistan.

WHAT can I do? WHERE and WHEN?

As Kurds, their friends and supporters, political parties, trade unions, social movements, and defenders of democracy and justice in the UK, we have a duty to speak up now and hold our government to account over their role in Turkey’s attempted genocide against the Kurds.

We demand the UK halts arms sales to Turkey; pressures Turkey for an end to the conflict; stops criminalising the Kurdish political movement; and pushes for re-opened peace negotiations.

That’s why we’re calling a major national demo on 11 June. Join us to mobilise and fight back against Turkish state fascism. Let’s show the UK government we won’t be silent any longer.