Stop the Turkish Invasion! #riseup4rojava October Demonstrations in the UK 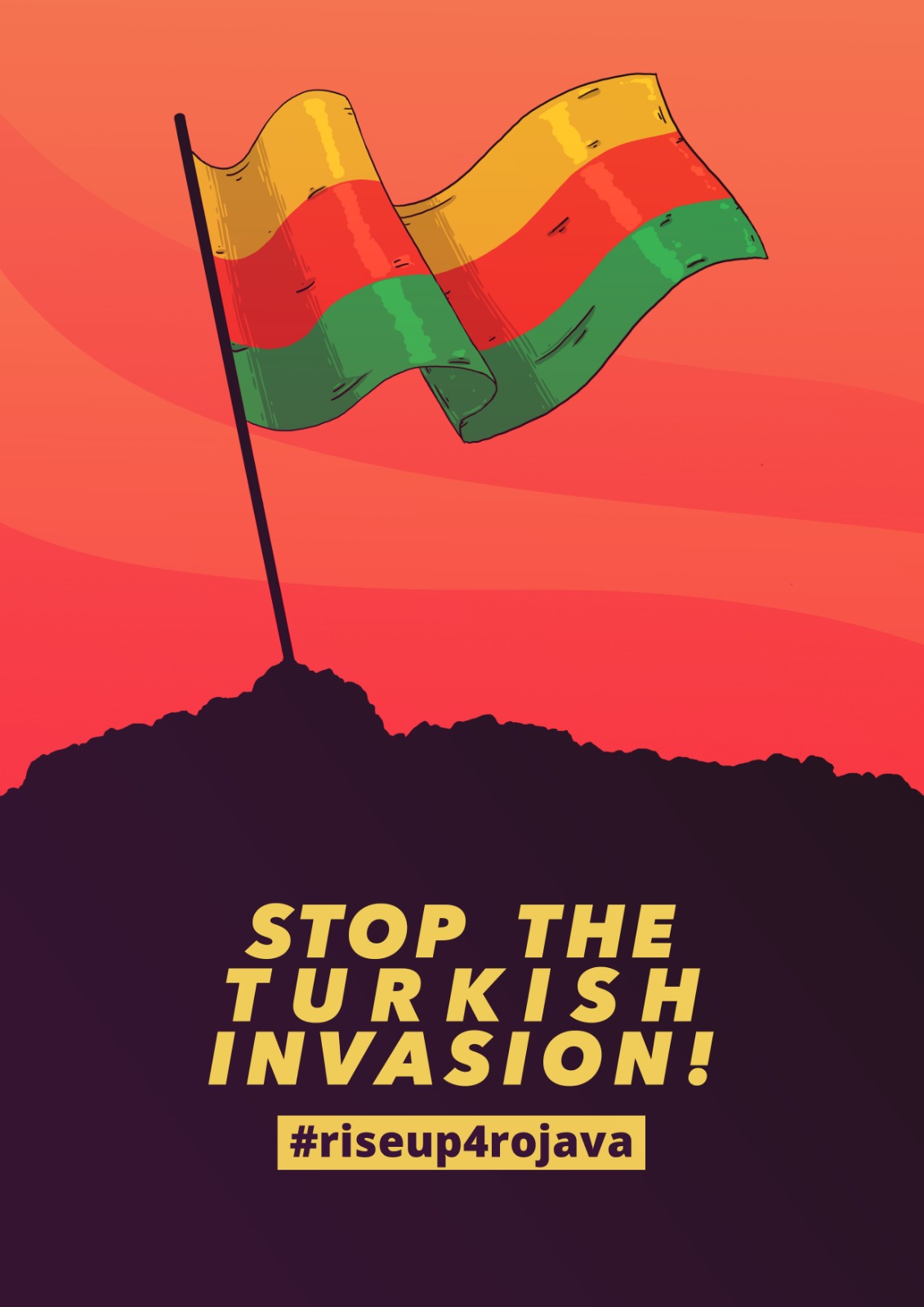 On Sunday night Donald Trump gave Turkish president Erdogan the green light to invade north-east Syria. Run by a Kurdish-led administration on the principles of direct democracy, equality for all peoples, ecological justice, a cooperative economy and women’s liberation, it is the most peaceful and stable part of Syria. The movement leading the administration is the same movement that defeated ISIS with the assistance of the US-led international coalition. They now guard over 70,000 ISIS fighters, families and supporters, but with the minimal resources available conditions are desperate and the situation is fast becoming unsustainable. If the Turkish invasion happens it will be impossible.

Following the removal of Kurdish mayors from Turkey’s Kurdish regions, and expanded invasion of areas under the Kurdistan Regional in northern Iraq, the Turkish state is looking to expand its racist anti-Kurdish was deeper into northern Syria. This follows the invasion, occupation and ethnic cleansing of Afrin in north-western Syria in January 2018, and puts at risk not only the peace established by the administration’s democratic system, but also the territorial defeat of the ISIS “caliphate”. The Turkish state is known to have bought oil and provided logistical support for ISIS, as well as incorporated ISIS militants in the mercenary forces used to occupy Afrin. The Turkish state cannot be trusted to properly guard or resolve this issue, and an occupation would put at risk not only Kurds but all the people of North-East Syria, including Arabs, Armenians, Chechens, Turkmen, Syriac, Assyrian and Khaldean Christians and Yezidi.

So Trump’s green light will lead to a resurgence of ISIS, genocidal ethnic cleansing and a new refugee crisis. In the process it will destroy Syria’s last hope for a democratic solution beneficial to all its people, as well as one of the most important examples of how to build a truly democratic, ecological and feminist society.

11,000 people gave their lives in the struggle to defeat ISIS, including 10 British citizens, such as Anna Campbell, killed by a Turkish airstrike in Afrin in March last year. We will not ignore their sacrifice, we will #RiseUp4Rojava and stop the war on North-East Syria!

DEMONSTRATIONS ACROSS THE UK

Join us to demonstrate in solidarity with Kurds and all the people of North-East Syria! Come to a demonstration near you:

LONDON, Picaddily Circus
The long promised Turkish ground invasion of North-East Syria has begun. This is another attempt by the Turkish state to commit ethnic cleansing and genocide on the Kurdish people. The same fate awaits North-East Syria’s many Armenian, Assyrian, Khaldean and Syriac Christians and Yezidi.
We say: NO! We demand that the British government honour the sacrifice of 11,000 people martyred in the struggle against ISIS fascism, including 8 young British citizens. They must use their position in NATO to stop the Turkish state invasion.
Join us for an emergency rally in Picadilly Circus and march to Downing Street.
Stop the Turkish invasion, #RiseUp4Rojava!
– – – – – – –

Cardiff and Wales will be joining a Global Day Of Action against the Turkish Occupation and ethnic cleansing of Kurds in North-East Syria. We’ll be meeting at noon at the Nye Bevan statue (Queen Street) to hand out leaflets and stand in solidarity with the Kurds and all the people of North-East Syria.

Join us to demonstrate in solidarity with Kurds and all the people of North-East Syria!