Today (26 January) is the second anniversary of the expulsion of Islamic State forces from the city of Kobane. Out numbered, out gunned and blockaded by Turkey the YPG, YPJ and their allies turned the city into a graveyard for the Islamic State.

It was at Kobane that the Islamic State was halted after sweeping across Iraq and Syria. Where the standing armies in Iraq and Syria fled, the militants of the YPG and YPJ stood firm.

Over 600 YPG fighters and their allies gave their lives in the battle. Let’s honour their sacrifices by making sure we redouble our efforts to support the heroic resistance in Rojava/Northern Syria and the revolution they are making. 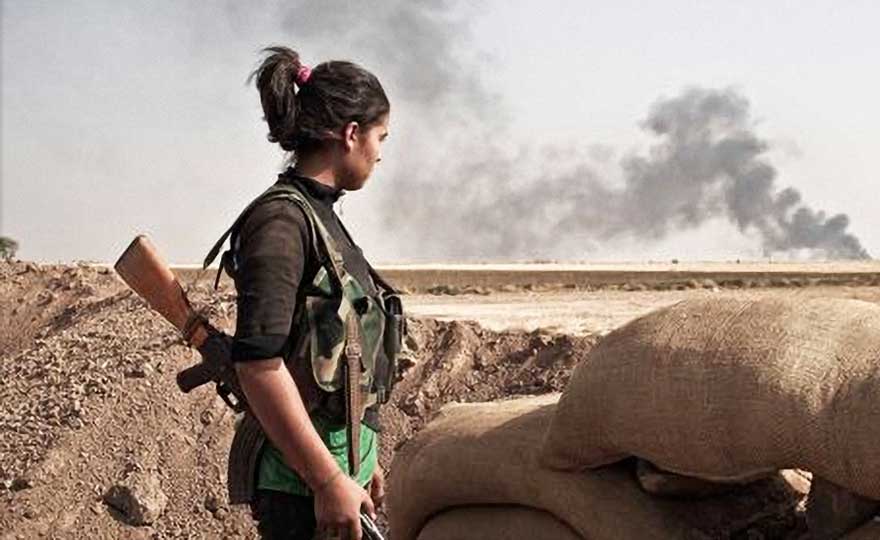 YPJ fighter Jinda Welat, who had participated in the Kobanê resistance against ISIS gangs at the southwest front, spoke to ANF on the 2nd year anniversary of Kobanê victory.

Speaking to ANF, Welat stated that the resistance of a small town like Kobanê spread across the entire world and Kurdish women proved their strength through Kobanê resistance. She said Kobanê became universal and had a great impact on the Middle East and Rojava.

Welat stressed that one’s commitment and will get stronger against dirty creatures such as ISIS gangs and three years ago, she and her comrades basically fought a dirty menace and system in Kobanê that has been troubling humanity for thousands of years.

Jinda Welat is from Kobanê and joined the YPJ right before the ISIS attacks on the town. Despite her lack of experience, she fought valiantly on the front line against ISIS.

“YPJ’S WILL WAS STRONGER THAN THE HEAVY WEAPONRY OF ISIS”

Welat stated that they had to repel the attacks of ISIS gangs in order to liberate Kobanê, and very few resources were available to them at the beginning of the attacks. She told that: “We lacked guns and military equipment. The gangs had many different types of heavy weaponry. They were attacking the YPG and YPJ with powerful weapons. But the YPJ’s will was stronger than their heavy weapons. This will made the victory possible.

Welat emphasized that the most violent attack of the gangs took place at Mürşitpınar border gate on November 29, when the gangs wanted to take the border gate under control but were repelled by YPG and YPJ fighters. Welat emphasized that YPG and YPJ fighters displayed a glorious resistance with high morale and self-sacrifice against ISIS gang groups.

“WE DID NOT SURRENDER, WE ENHANCED OUR RESISTANCE”

Welat remarked that the strength and persistence of YPG and YPJ fighters, who wanted to prevent the repetition of Shengal tragedy, brought the victory. She noted that ISIS was waging psychological warfare and carried out beheading and other cruelties in order to break the morale and the will of YPJ fighters. However, YPJ fighters did not surrender. Instead, they became more angry and enhanced their resistance.

YPJ fighter stated that Kurdish women such as Arin, Özgur, Gulan, Viyan, Hebûn, Zozan, Stêrk, Êvar, Nûjiyan and Zehra became immortal and set an example to the rest of the world with their resistance against ISIS.

“YPJ FOUGHT ISIS GANGS WITH THE PHILOSOPHY OF ÖCALAN”

Remarking that the ideology and resistance philosophy of Kurdish People’s Leader Abdullah Öcalan was the basis of the YPJ resistance in Kobanê, Welat said uch difficult periods strengthen the will of people.

The YPJ fighter said they resisted ISIS gang members with faith, will, and a spirit of ideology and spirit of self-sacrifice. She added that what they fought was not a group of gangs but the mentality of thousands of years.

“OUR MARTYRS WON THE BATTLE OF KOBANÊ”

In her statement, Welat commemorated the fighters that fell during Kobanê resistance and said the legendary resistance and spirit of Kobanê shows that the gains of Rojava revolution came through self-sacrifice. Welat emphasized YPG and YPJ forces put up great resistance with the help of peoples from different ethnic and faith groups, at a time when the Turkish president Tayyip Erdoğan said ‘Kobanê is about to fall.’

“THE WILL OF FREE WOMEN WILL NEVER SURRENDE”’

Welat stated that YPJ fighter Arîn Mîrkan killed dozens of gang members with her action of self-sacrifice against ISIS and gave this clear message: “The women you massacred and sold in markets are now fighting against you. You will never conquer the will of free women.”

Welat noted that Arîn Mîrkan’s action got the attention of women all around the world and showed that Kurdish women would never accept slavery and would always voice their desire for freedom everywhere in the world.

“WOMEN BROKE THE CHAINS OF SLAVERY WITH THE BATTLE OF KOBANÊ”

Welat recalled that 3 years have passed since the war of Kobanê and resistance has spread to different areas now, when Kurdish women have made many gains and inspired women across the world with their sacrifices. She added that women are now reconstructing society from its ashes.

YPJ fighter Welat said women have proven that Rojava revolution is a women’s revolution, and broke the chains of slavery with the war of Kobanê.

Welat emphasised that women’s struggle against cruelty has changed the course of history, and many women fell as martyrs in YPJ ranks as they fought for social values in an unprecedented manner. Welat said that Kurdish women are playing a leading role in the struggle for the freedom of women across the world, and the YPJ members feel obliged to fight to their last drop of blood and gain victory against ISIS gangs, who attack the unity of peoples and values of freedom.