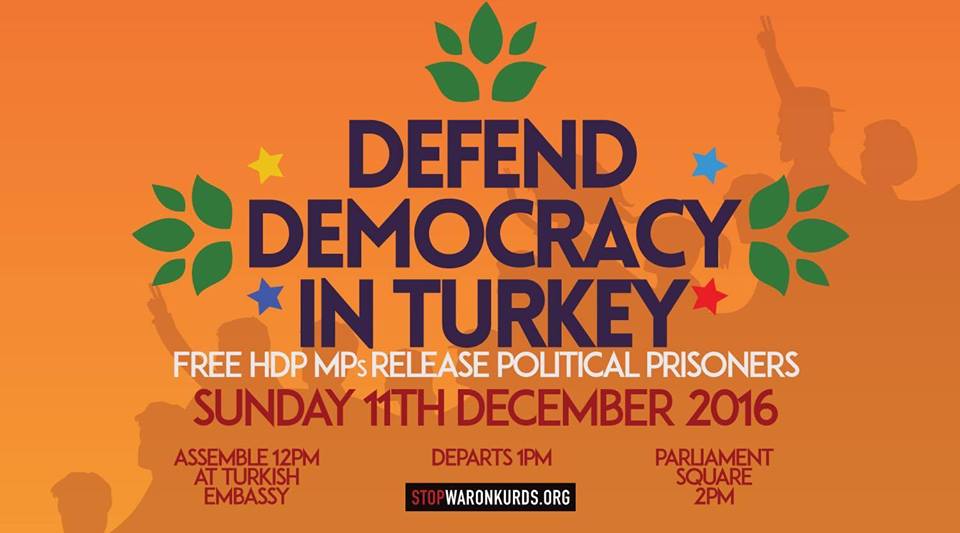 In Turkey on 7 June 2015, the Peoples’ Democratic Party, HDP received more than 6 million votes across the political and cultural spectrum and prevented the governing AK Party from gaining a majority. This prevented Erdogan from creating an executive presidential system. Since then Erdogan has unilaterally ended negotiations for a political resolution to the Kurdish question, and the Turkish state have declared war on all progressive opposition forces united under the umbrella of the HDP.Kurds, Armenians, Arabs, Assyrians, Turks, Alawites, Sunnis, secularists, feminists, workers, students and LGBTI groups all unite under the banner of the HDP. By uniting these diverse constituencies under the banner of democratising Turkey, the HDP became the 3rd largest party in Parliament, with 59 MPs.

More than 16,800 people also voted for the HDP in the UK, which was 60% of the total vote, making the HDP the 1st party for the diaspora in the UK. Unfortunately, this has not been echoed in the statements of UK government, who have kept silent on the Turkish regime’s attacks on basic human rights.

Following the siege and destruction of a dozen Kurdish towns and cities, the generals responsible launched a coup-attempt on 15 July 2016, which was quickly put down. Erdogan responded with a counter-coup, seizing the opportunity to suppress and punish all opposition.

35 Kurdish Democratic Regions Party, DBP municipalities have been seized using state of emergency decree laws. The mayors of these councils, as well as 2500 DBP members, have been imprisoned. More than 100,000 public sector workers, including 11,000 Kurdish and pro-Kurdish teachers, have been sacked. 170 media outlets critical of the government have been closed down, with at least 130 journalists jailed. Hundreds of academics, lawyers and students have also been at the receiving end of Erdogans rage.

Finally, on 4 November 2016, 10 Peoples’ Democratic Party deputies, including co-chairs Selahattin Demirtas and Figen Yuksekdag, were detained and imprisoned on trumped-up charges of membership of the PKK. In the week since, 441 members of the HDP have also been arrested for protesting the abduction of MPs. There are now no democratic channels left to exercise in Turkey.

Turkey’s turn towards dictatorship is cause for concern not just for the people of Turkey, Kurdistan and the Middle East, but also very dangerous for Europe and the wider world, who have granted Erdogan immunity for all his heinous crimes in exchange for largely sheltering the west from the refugee flow from the Middle East.

The Turkish government’s policy of war on the Kurdish people and other progressive and democratic forces is taking Turkey towards a point of no return and possible civil war which of course, will result in the failure of the EU deal regarding refugee. More war, means more refugees and migrants.

• We are calling on all political representatives, trade unions, progressive circles and the British public to support the HDP and demand the release of all HDP MPs and political prisoners in Turkey.

• We are calling on the UK Government to condemn, in the strongest possible terms the Turkish state and Erdogan, and demand that they respect the most basic democratic freedoms, first and foremost by releasing all political prisoners.

The HDP is the best hope for a secular, democratic, gender-equal Turkey where human rights and the rule of law are practiced and defended.