UK activists’ report on the struggle for autonomy in Silvan

“Autonomy means that we will live in our own way, with our own rules, our own culture and our own identity. I support this from my heart.”
– Narin, resident of Farqîn

In August 2015, the city of Farqîn (Silvan in Turkish) declared autonomy from the state. Barricades were erected on the streets of three neighbourhoods of the city – Mescit, Tekel and Konak – defended by armed people’s protection teams. The Turkish state responded by using intense violence and  imposing a series of curfews, culminating in a 12 day siege of the neighbourhoods in November. An official from the ruling Justice and Development Party (AKP) threatened that “the security forces will erase the three Silvan neighbourhoods from the map”.

On the 20th and 21st November 2015, we travelled to Farqîn in solidarity with the residents of the city. The intention of our visit was to document the police and military violence (in contrast to the biased reports in the Turkish media, depicting the people of Farqîn as terrorists), to see first-hand the destruction that was caused, and to let our Kurdish friends know that we support them in their struggle for autonomy.

On the 10th August, the residents of Farqîn erected barricades in the city. On 15th August, Barış Güleryüz of the DBP (Democratic Regions Party) read out a statement on behalf of the people of Farqîn, declaring themselves autonomous from the state. Since then, Barış has been forced into hiding and the HDP (People’s Democratic Party) co-mayor, who was present at the declaration of autonomy, has been imprisoned.

Between August and October there were five different curfews, and finally, between the 3rd and 14th November, there was a twelve day curfew, ending when the state brought the military onto the streets and used heavy weaponry on the people of Farqîn.

When we arrived, the barricades had been destroyed and bulldozers were clearing up the rubble. Most of the military had left, but the police certainly hadn’t. As we walked through the neighbourhoods that had been affected by state violence, armoured police vehicles circled the streets and a drone flew overhead.

We asked Narin, a resident of the city, why the people of Farqîn had declared autonomy.

“There were different reasons. In October 2014 there was a big uprising in solidarity with Kobane. The state made new security laws giving greater powers to the police. Tension remained high since then. Another reason for the declaration of autonomy was because of the Suruç and Amed bombings. Even the people who were wounded in those bombings were attacked with tear gas by the police. Everything is related. People on the barricades in Farqîn said that ‘we are the children of the city. We have grown up here and we will defend our city. We are the people’s protection units.‘”

During the 12 day curfew in November, armed special forces police wearing balaclavas – the Özel Harekat – terrorised the city, whilst military tanks fired from the surrounding hills. We were told that that the Özel Harekat used M32 multiple grenade launchers on civilians. Snipers shot at people from rooftops. People said that the snipers came to houses, broke down the doors and forced people to leave so that they could shoot from their buildings. Helicopters circled in the sky and were used to fire on people. A resident said, “because of our declaration of autonomy, they attacked us as if we were Daesh (ISIS).”

Meanwhile, people who lived outside of the barricades were bombarded with tear gas and water cannons. One resident told us, “they put something like pepper inside the water cannons. My ear swelled up like a balloon.”

Fourteen civilians were killed by state forces between August and November; four were under eighteen years old. Nine year old Hasan Yılmaz was killed after he found an unexploded grenade. Three other children were injured. Hayriye Hüdaverdi was seventy-five years old when she was killed by a sniper. The police also shot people who came to help the wounded. Fifty-five year old İsmet Gezici was killed when he tried to help his twenty-four year old nephew Engin after he was shot.

After we left Farqîn, a new media report stated that seventy-eight year old Latif Nangir died of brain damage after a bomb exploded near him. When his wife tried to take him to hospital, state forces fired on them.

“During the curfew, we helped each other. People had to stay inside to protect themselves. They found safe areas like under the stairs. People took in their neighbours. We didn’t have electricity. Twenty-four pylons had been attacked. People were running out of food, and some people didn’t have water.”

People in Farqîn have been trying to organise themselves independently of the state, on the basis of a system of direct democracy, called democratic confederalism or democratic autonomy. Narin told us:

“Even though the barricades have gone we still consider that we have declared autonomy. I never use state things. With our language and culture we have our own programmes and make our own political decisions. In every neighbourhood you have an assembly. These are all steps towards democratic conferderalism. We are learning and giving ourselves time to work well, like in Rojava.”

We asked a local journalist why the barricades were finally taken down. He told us:

“For nine days the police could only move 300 metres, but then they began a new military strategy. The tanks had stayed on the hills up until then, and then on the ninth day they came inside. On the tenth day people retreated and the army and police stayed for two more days arresting people and clearing away the bullets so that people wouldn’t see what they had done. They graffitied all over the walls before they left.”

As we walked through the streets of Farqîn, we were shocked by the amount of damage that was done by the police and military, and we were amazed that more people had not been killed. Police had told hospitals and staff who had wanted to help the wounded, “you’re helping the terrorists.”  There were bullet holes everywhere; many buildings have gaping holes in where they had been shelled. Other buildings had been set on fire.

We were led up the staircase into one building which had been set on fire. The rooms were charred black, all of the windows were smashed, and childrens’ toys were strewn in the middle of the floor amongst broken glass. The owner of the house took us up to a room which had been shelled. The blood of Yakup Sinbağ covered the wall. He was twenty-eight years old and was shot through the heart on the 9th November. 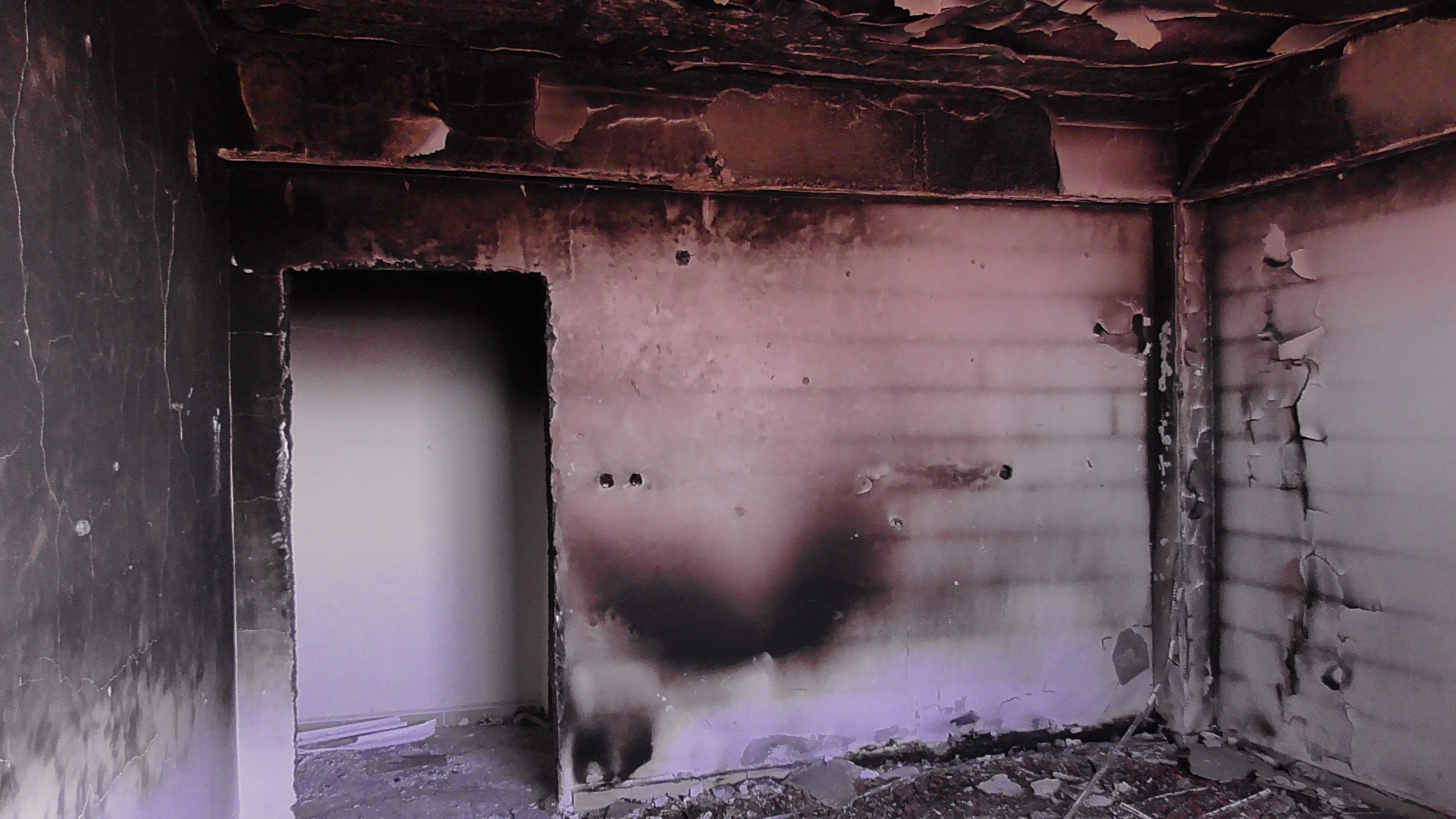 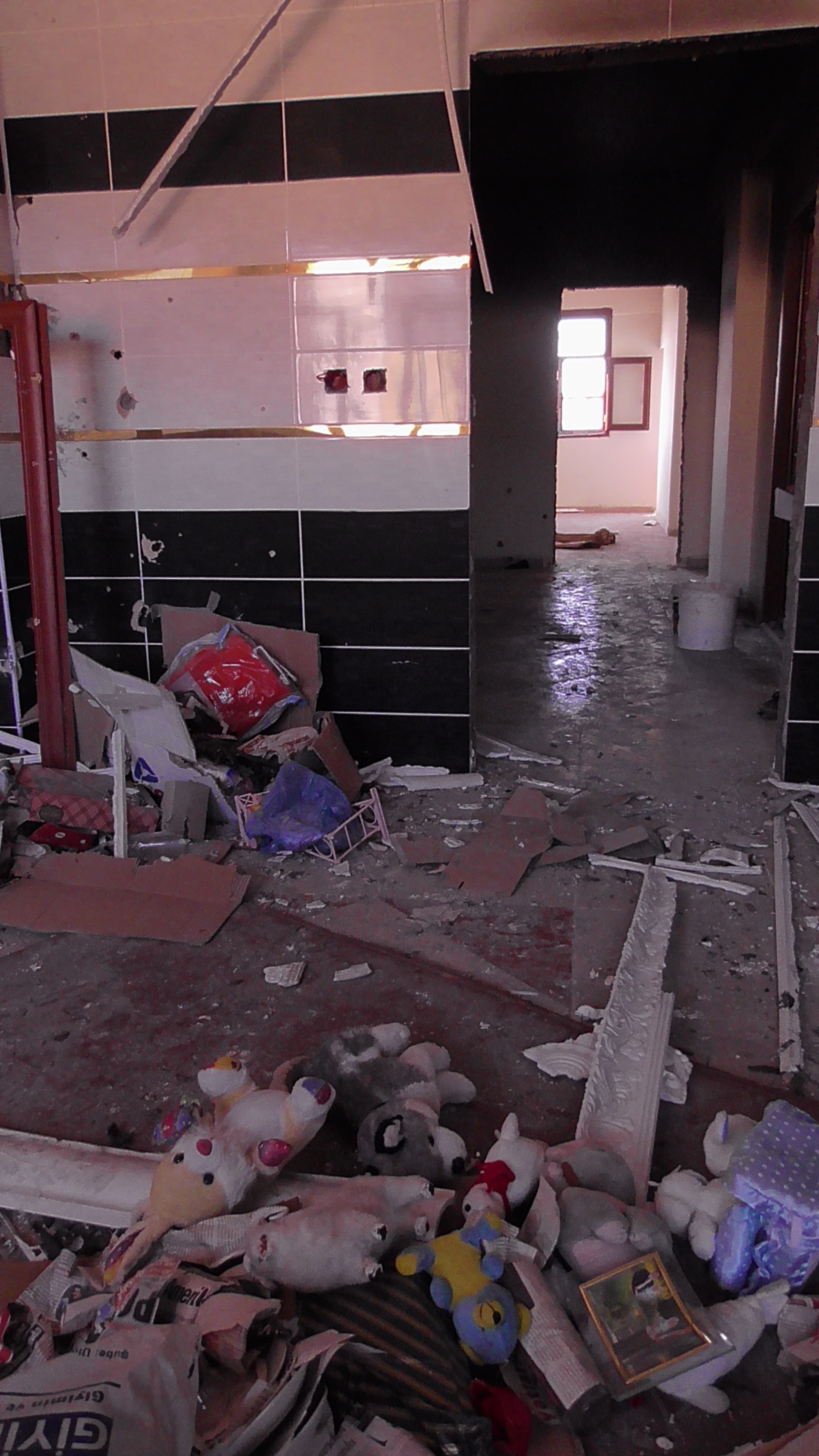 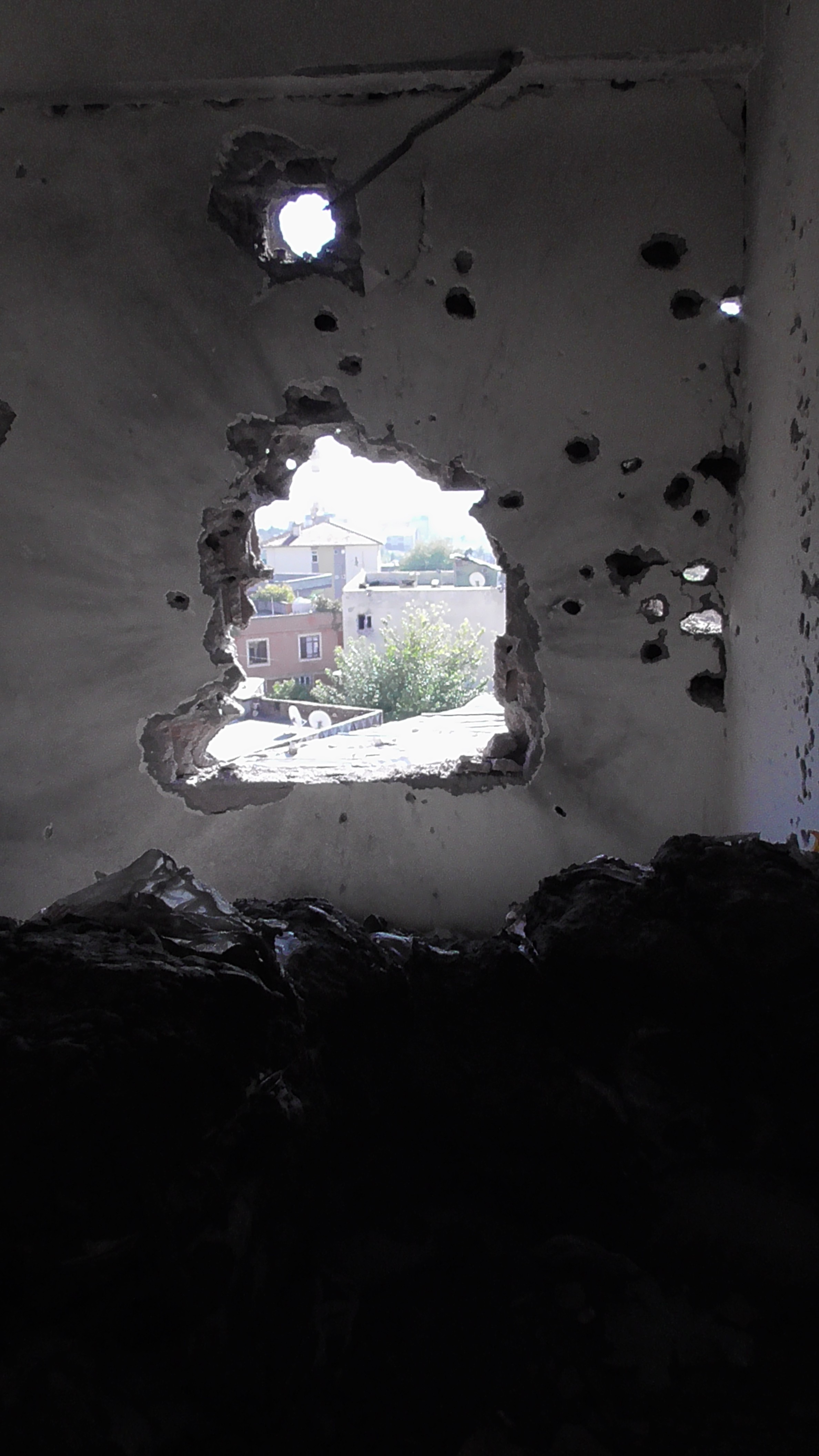 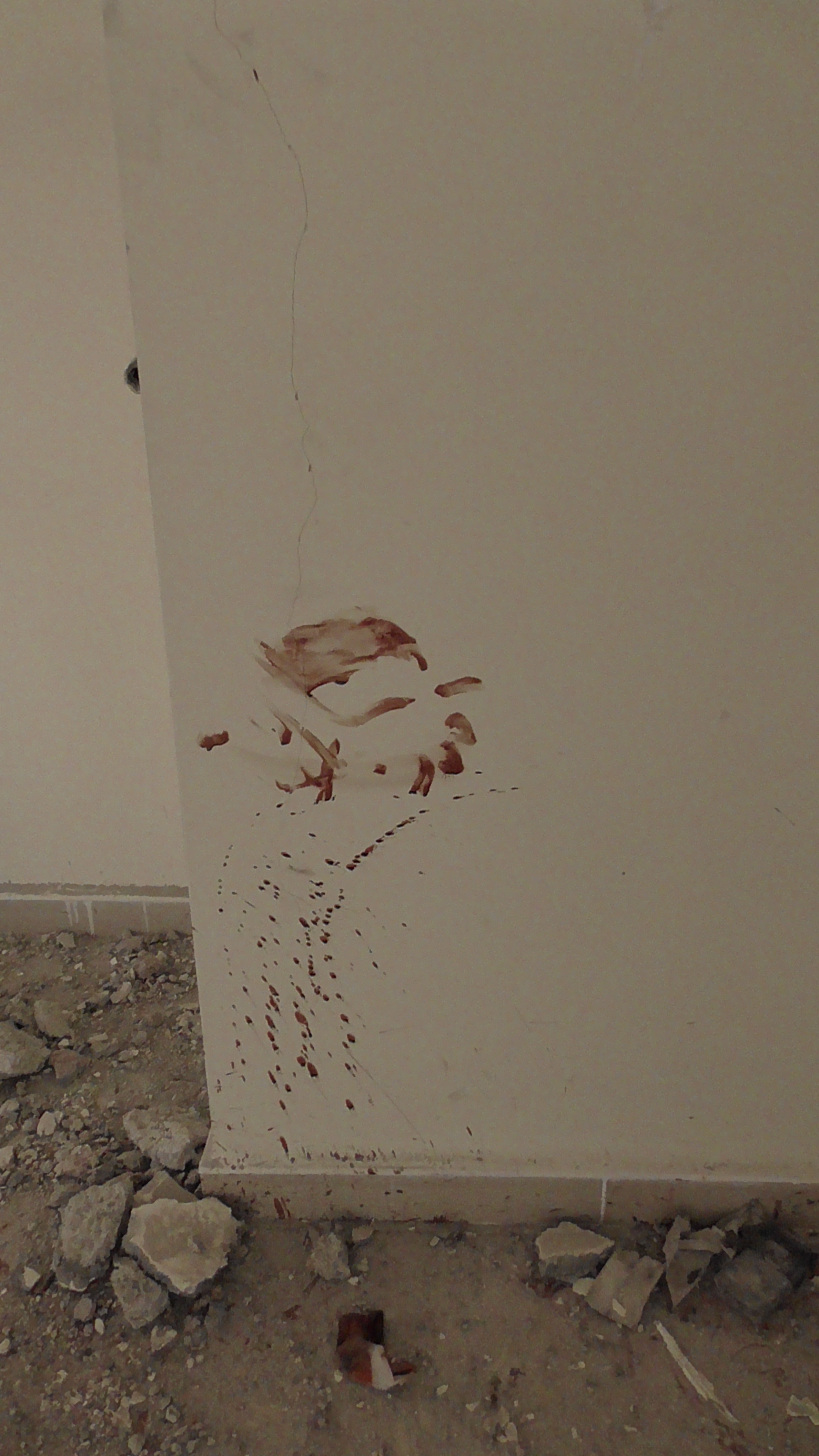 Whilst walking through the streets, we met an older woman who told us,

“My husband died of a heart attack during the clashes. Now I live alone with my daughter. My house was damaged. They just left my soul inside me. They destroyed everything else.”

We also met a man with a learning disability who showed us his injury. He was shot in the back by a sniper as he walked on the street during a curfew.

Children gathered around us, eager to show us some of the bullet and munition casings littering the streets.

As we walked through the neighbourhoods, we saw a lot of graffiti that had been painted over. We were told that the police had left fascist and threatening messages on the walls. One piece of graffiti said, “In the teeth of the wolf there is blood.”  The wolf is a symbol of fascists in Turkey.

We spoke to Zuhal Tekiner, co-Mayor of the municipality in Farqîn. She is only thirty-five years old and has already been imprisoned twice by the Turkish state. She told us:

“When you go home to the UK, please talk about every bullet that they fired, about every person who is dead, and make noise about this. Ask the state of Turkey to be accountable for every bullet they use. Remind Turkey of human rights. They try to depict us as terrorists. You can change this mindset. We are not terrorists. It’s not a war between different countries. We are ready to give our own lives.”

We asked her whether we should protest against the exporting of weapons to Turkey. She replied,

“It would be beautiful if people tried to stand against the selling of weapons to Turkey. The Turkish police and military are using new guns and bullets. A 75 year old woman was killed. Just one bullet is enough to kill. When it enters the body it causes a small hole and when it comes out it is huge.”

The damage done to people’s houses and shops in Farqîn is immense. According to Zuhal:

“800-1000 houses were affected because of gunfire. Some more, some less. There are no windows left in many houses. We think the cost of reconstruction could be 5 million Turkish Lira. 12,000 people now don’t have places to live because of the damage.”

Reconstruction work going on, as police circle the neighbourhood

We also spoke to a man on the street who was helping with the reconstruction. He told us: “We must be ready for winter – there is no other choice. The reconstruction work needs to be finished in one month’s time.” There is a campaign to help the families who have lost their houses; money can be donated to the municipality to be given to them.

Cizre, Silopi, Varto, Erciş, Siirt and Nusaybin have also declared autonomy over the last few months. As we publish this report, residents of Nusaybin and Gever (Yüksekova) are being murdered daily. In the Sur district of Amed (Diyarbakır), young people are currently armed behind the barricades, protecting their streets from the police.

“We have lived through very bad things. It looks like we’re in a bad situation but for the future generation it will be clearer. We believe we will achieve autonomy. When we were babies our parents were in prison and tortured. Now we take their place. Thanks to their struggle we take to the streets. And thanks to us our children will also do this. We have hope for the future. We don’t want to live with their borders. We believe that we can change things. When we struggle here we believe that all of Kurdistan is with us…They said they wanted to erase us from the map. Now we will draw the map again.”